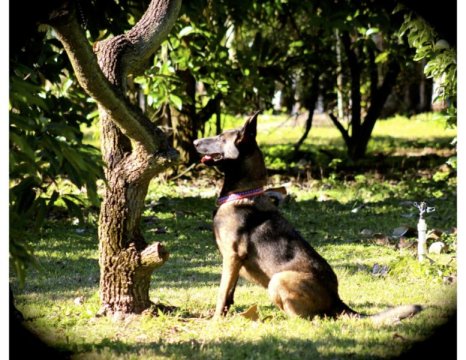 A study out of Florida International University evaluates the use of scent-discriminating canines for the detection of laurel wilt-affected wood from avocado trees. Julian Mendel, Kenneth G. Furton, and DeEtta Mills have ferreted out a possible solution to a serious issue in one corner of the horticultural industry, and then ascertained the extent to which this solution is effective.

The results of this study are presented in their article “An Evaluation of Scent-discriminating Canines for Rapid Response to Agricultural Diseases” published in the latest issue of HortTechnology.

Laurel wilt disease has resulted in the death of more than 300 million laurel trees in the United States alone. One affected plant is the commercially important avocado tree, the second-largest tree crop in Florida behind citrus. This disease has had a devastating effect on the industry in South Florida in past harvest seasons, and two larger avocado industries in Mexico and California are naturally worried that this disease, if it hits their crops, could spread fast enough to destroy their seasons.

Once affected by laurel wilt disease, trees succumb soon after infection. Once external symptoms are evident, this disease is very difficult to control and contain as the pathogen can spread to adjacent trees via root grafting. Until now, there has been no viable, cost-effective method of early diagnosis and treatment.

Laurel wilt is the consequence of an invasive species — the redbay ambrosia beetle — originally from Asia, which was inadvertently introduced into the United States in untreated wooden packing material.

But as with so many ailments, early detection can be instrumental in deterring a widespread infection. The use of scent-discriminating dogs has shown to offer the avocado industry legitimate signs of hope in their fight against the spread of such a profit-crusher throughout their groves.

Three dogs were trained and studied for their ability to detect the early presence of laurel wilt by scent. At present, canines are extensively used in law enforcement and forensics in the location of missing persons, explosives, drugs, weapons, and ammunition. More directly applicable, dogs have demonstrated the ability to detect invasive species of spotted knapweed, brown tree snakes, desert tortoises, and various cancers.

The highly sensitive canine olfactory system is capable of detecting odor concentrations at exceedingly minute 1 to 2 parts per trillion. The authors believe it likely, with properly directed training, that these dogs could use their natural talents to service the protective needs of the potentially ailing avocado industry.

During the course of the study, 229 trials were performed, and only 12 of those yielded false alerts. It was observed that dogs are indeed capable of high levels of relevant performance, even in harsh weather conditions such as high heat and humidity. The study provided proof that dogs can detect agricultural diseases such as laurel wilt and can be a powerful management tool if the disease is caught in its earliest stages.

About the valuable service provided by these dogs, Mills adds, “It is the best ‘technology’ so far that can detect a diseased tree before external symptoms are visible. The old saying that ‘dogs are man’s best friend’ reaches far beyond a personal bond with their handler and trainer. It is depicted in their excitement every day as they deploy to the groves. Man’s best friend may even help save an industry.”