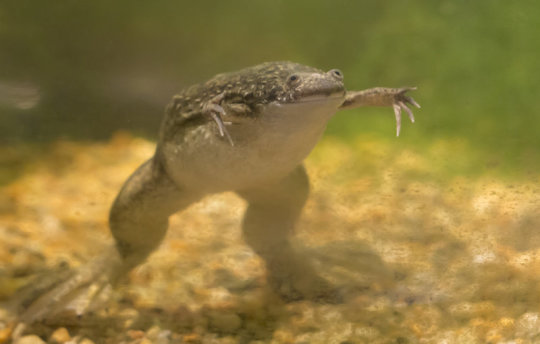 Can the environment affect how the spinal cord develops specialized circuitry, or is that process hardwired, following prescribed genetic instructions turned on early in the embryo?

A UC Davis study that compared the effects of cold and warm temperatures on the development of frog eggs into larvae found that environmental temperature significantly changes how the nervous system develops.

The study, which appears online May 23 in the journal Current Biology, found environmental temperature activated temperature-sensitive channels, influencing gene expression and altering neurodevelopment. The research, while conducted in frogs, has parallels across species, including humans.

“We found that the temperature-sensitive channel TRPM8 drives changes in the developing nervous system, allowing frogs to adapt to the environment,” said Laura Borodinsky, professor of physiology and membrane biology at UC Davis School of Medicine and study senior author.

“Larvae grown in cold temperatures had more neurons responsible for movement — a crucial function that better equips young frogs to escape predators and other potential dangers,” she said. “They also had larger muscle mass and a stronger swim response than those reared in warmer temperatures when tested at cold temperatures.”

Temperature important for neurodevelopment in humans

Temperature is an important factor in the development of the nervous system in humans. Newborns, especially premature babies, do not develop the ability to regulate body temperature until a few months after birth or even longer. Studies also suggest that fever during pregnancy may affect the developing brain and nervous system, increasing the risk of autism spectrum disorder and schizophrenia.

Borodinsky believes when temperature changes are sudden and occur during critical periods of development — or when molecular mechanisms to adapt to these changes are not working — disruptions in nervous system development can affect health.

Temperature channels as a way the environment changes gene expression

Temperature-sensitive channels belong to a diverse family of ion channels, TRP channels, that respond to a range of conditions. While some TRP channels are temperature sensors, others are sensitive to pain, pH, touch, light and sound. These cellular pathways that allow organisms to sense temperature are well-conserved through evolution and present across species.

For the study, Kira A. Spencer, first author of the paper and a former graduate student in the Neuroscience Graduate program at UC Davis, raised fertilized frog eggs at cold or warm temperatures in Petri dishes. At the larval stage, they measured responses to light touch and swimming responses, and number of spinal motor neurons. They assessed the dependence of spontaneous electrical activity, which drives many aspects of neuronal differentiation, on temperature, as well as the genetic factors that regulate developing spinal cord cells and the role of the cold-temperature channel TRPM8.

“We found that the cold-temperature sensitive channel TRPM8 mediates the developmental changes that give frog larvae an advantage and allow them to function optimally in cold temperatures,” Spencer said.

“Our results provide insight into how the environment influences gene expression during development, and point to a promising avenue for exploring how genes and the environment interact, including the role that other TRP channels play in nervous system development and disease.”