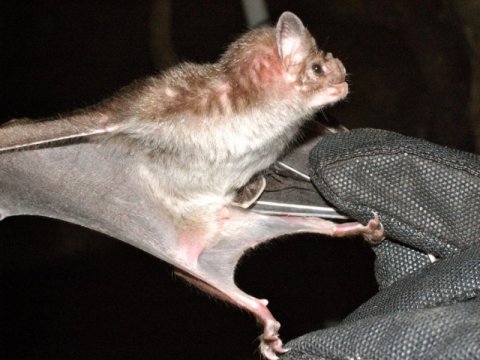 Vampire bats could hold the key to new treatments for a range of serious medical problems, but researchers have hit a snag accessing the specimens needed to advance their work.

An international team led by The University of Queensland has found a new class of blood pressure-regulating peptides in the venom of the common vampire bat (Diphylla ecaudata).

UQ School of Biological Sciences researcher Associate Professor Bryan Fry said the peptides could help revolutionise treatments for a wide range of conditions, including hypertension, heart failure, kidney diseases and burns, but the research had been hampered by criminal activity at a Mexican field site.

“The peptides are mutated forms of the Calcitonin Gene Related Peptide (CGRP), used by our bodies to relax blood vessels,” he said.

“The peptides from the bats are unusually selective in their mode of action, making them even more therapeutically useful than the CGRP, as they have fewer side-effects.

“This could potentially help doctors in the treatment of a range of disorders featuring heightened pressure in small blood vessels, or may be able to improve blood flow to damaged or transplanted tissue such as skin grafts.”

Associate Professor Fry said there was much more to be learned than feared from the unique but much maligned vampire bats.

“This discovery is another example of why it’s so important to broadly protect nature, since we can’t predict where the next great biologically sourced drug discovery is going to come from,” he said.

“Venomous animals around the world are under threat, even more so than most other threatened or endangered species, due to deliberate persecution driven by fear or misunderstanding.”

“We can’t access our original field site in Mexico anymore, because we’re told that region has been taken over by drug traffickers,” he said.

“It’s now too dangerous for even my Mexican colleagues to go there, let alone a gringo like me.

“We’ll have to find new field sites that are safe to work in, but once we do that we’ll be on track to find new peptide variations and potential wonder drugs, helping improve and save lives.”