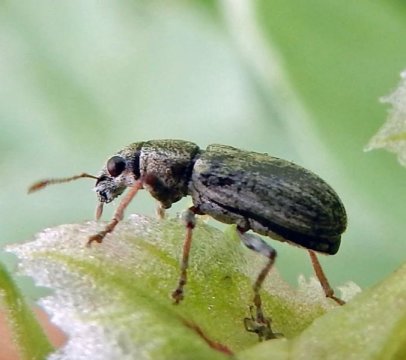 Beans are awesome. They are packed with nutrients and are high in protein. They can grow in many different environments. They help replenish soil nitrogen levels. They are a vital crop for food security in many parts of the world.

But a small beetle can cause big losses to bean crops.

The common bean weevil can infest beans in the field or in storage. Weevil larvae bore into seed pods and enter seeds. They continue feeding inside the seeds until coming out as adults to infect more seeds.

Weevil infestations can spread rapidly and lead to significant losses of bean crops. In fact, under favorable conditions, weevils can infest entire quantities of stored beans within a few months. Researchers hope to change that.

“Developing varieties of beans that are resistant to the bean weevil is a long-term solution to a very serious problem,” says Kelvin Kamfwa, bean breeder at the University of Zambia.

Kamfwa is the lead author of a new study that has narrowed down the genetic locations of several weevil resistance genes in the common bean. The study confirmed that weevil resistance in beans is genetic. Resistance to weevils can be transferred to bean plants with different seed types and colors.

“This will allow breeders in different countries to introduce weevil resistance into bean varieties adapted to local conditions,” says Kamfwa.

“Beans with larger seeds are preferred by consumers in several areas of Africa,” says Kamfwa. This means growers will have eager buyers, ensuring the growers’ livelihood.

Bean varieties that are resistant to weevils can help farmers in the field and when it’s time to store harvests.

In some areas, farmers currently treat bean seeds with ash from cooking fires to control weevils. “But that’s not particularly effective,” says Kamfwa. Treating seeds with chemicals can be effective but is costly and may carry health risks. Suffocating weevils by triple bagging beans in storage is another option, but effective bags may not always be available.

Weevil-resistant bean varieties will allow farmers the flexibility to store seeds. “They will be able to save seeds for home use or for the next planting season,” says Kamfwa. “They may even store seeds to sell when prices are more favorable.”

To learn more about the genetics of weevil resistance in the common bean, Kamfwa and his colleagues used bean plants derived from an initial mating between a weevil-resistant and a weevil-susceptible variety of common bean.

For each bean plant tested, the researchers calculated the percentage of bean seeds damaged by weevils. This measurement provided a quantitative idea of how resistant each bean plant was to weevils.

The researchers also sequenced the entire DNA of the bean plants. Then they combined the weevil-resistance measurements with the DNA sequence information.

Finally, the researchers used statistical analyses to find genetic signals-called markers-that are more common in the DNA of bean plants resistant to weevils. These genetic signals act like molecular beacons, allowing the researchers to hone in on regions of bean DNA that are important for weevil resistance.

“Using bean plants directly to research weevil resistance can be complicated and time-consuming,” says Kamfwa. “Being able to indirectly look for resistance with genetic markers will bring efficiency to the breeding process.”

The researchers found three regions of bean DNA important for weevil resistance. One of these regions was known previously, but two regions were new discoveries.

Kamfwa intends to develop a genetic marker system that can be widely used by bean breeders interested in developing weevil-resistant varieties.

“Ultimately, we hope our findings contribute to food security needs in countries where the common bean is a valuable staple food,” he says.