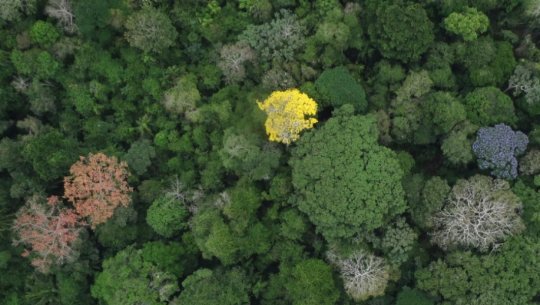 Working with high-resolution satellite imaging technology, researchers from Brown University and the University of California, Los Angeles have uncovered new clues in an age-old question about why tropical forests are so ecologically diverse.

“There are more tree species living in an area not much larger than a few football fields in Panama than in all of North America north of Mexico combined,” said Jim Kellner, first author on the paper and an assistant professor of ecology and evolutionary biology at Brown. “How this diversity originated, and why it persists over time is a paradox that has challenged naturalists for more than a century.”

The findings confirm a prediction from the 1970s, which posited that tropical forests are diverse because natural enemies keep populations in check. An enemy could be a seed eater, an herbivore or a pathogen, said Kellner, who is affiliated with the Institute at Brown for Environment and Society.

For example, consider an oak tree and a squirrel. The squirrel eats acorns and prefers to forage where oak trees are abundant. A lone acorn in the middle of a grove of maples is likely to go unnoticed by a squirrel, whereas many acorns in an oak grove will be eaten. If this kind of behavior is widespread in tropical rainforests, it could keep species from becoming too common, Kellner said.

Earlier studies have shown that this negative feedback phenomenon holds true among young trees — seeds, seedlings and saplings — but ecologists hadn’t been able to determine whether it influences adult trees, the reproductive portion of populations, he said.

“It takes decades for trees to become reproductive in tropical forests, and the problem is compounded by how rare each species is,” Kellner said. “We found that for this species, you would have to search about 250 acres to find one new adult tree every year.”

That challenge isn’t feasible on foot, but remote sensing can overcome the challenges of observing large areas.

Kellner and co-author Stephen Hubbell, an ecology professor emeritus at UCLA, used high-resolution satellite images to track individuals on Barro Colorado Island, a six-square-mile island in the middle of the Panama Canal, over 10 years. They looked for Handroanthus guayacan, a tropical rainforest tree that produces bright yellow flowers for a few days a year.

“By timing the satellite image acquisition with seasonal flowering, we were able to identify most of the adults for this species on the island,” said Kellner.

They found 1,006 adult trees. Starting in 2012 and looking backward over the 10-year study period, Kellner and Hubbell were able to identify when new trees joined the adult population for the first time. They used advanced statistical methods to make sure that they were in fact identifying new adults and not just trees that had skipped a year of flowering or had flowered early or late.

The researchers found that negative feedback affected the abundance of new adult trees and that it can influence the population of new adult trees in an area of almost 100 football fields. This contrasts with prior studies of juvenile trees, which found the effects of host-specific enemies are usually restricted to small areas, Kellner said.

To confirm the locations of trees from the satellite data, they went to the island and independently found 123 adult trees of the same species. Of these, 89 percent had been detected in the high-resolution images, suggesting that their data are a nearly complete census of the species.

Kellner said the implications could be broad.

“I can’t think of any idea in ecology that is more important than population dynamics,” he said. “It’s important for everything from fishing licenses to forecasting disease outbreaks.”