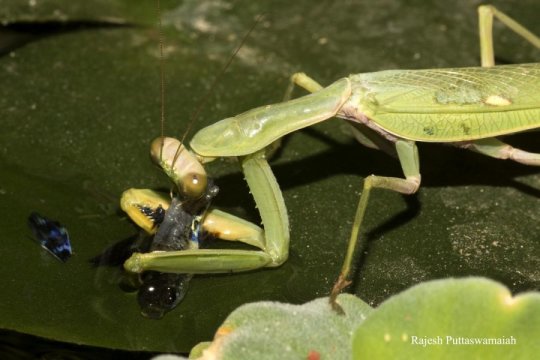 Commonly known to predate on insects, praying mantises have occasionally been observed to feed on vertebrates, including small birds, lizards, frogs, newts, mice, snakes and turtles. Mostly, such records have either not been scientifically validated or have occurred under induced and human-manipulated circumstances.

Last year, the team observed an adult male hunting and devouring guppies in a pond located in a private roof garden in Karnataka, India. Curiously enough, the predator came back five days in a row and caught a total of nine fish (a minimum of two a day). To reach its prey, the insect would walk on the leaves of water lilies and water cabbage growing on the surface of the pond.

Apart from being a curious first-of-its-kind, the observation raises three new discussion points worthy of further study, point out the researchers.

Firstly, the fact that praying mantises hunt on vertebrates outside cages in labs confirms that a single invertebrate species is indeed capable of having an impact on a whole ecosystem. In this case, a mantis preys on guppies which, in their turn, feed on aquatic insects.

Secondly, the discovery questions previous knowledge about the visual abilities of mantises. While the structure of their eyes clearly indicates that they have evolved to prey in daylight, the studied male specimen proved to be an excellent hunter in the dark. The insect managed to catch all nine fish either at sunset or late at night.

Besides visual, mantises might have evolved impressive learning abilities too. The researchers speculate that the observed repetitive behaviour might have been the result of personal experience, utilised to navigate the specimen. Sophisticated cognitive skills, on the other hand, might have allowed the mantis to develop its hunting strategies.

“Remembering the prey’s abundance in a particular site, in relation to their ease of capture and their nutritional content, could be one important factor of this choice and indirectly influence the individual predator’s fitness,” comment the scientists. “This should be investigated in further studies.”