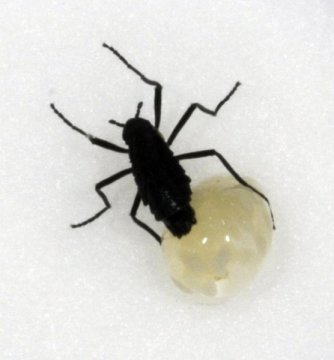 The good thing about the short Antarctic summer is it’s a lot like a Midwest winter.

But for wingless flies, that’s also the bad thing about Antarctic summers. The flies and their eggs must contend with an unpredictable pattern of alternating mild and bitterly cold days.

University of Cincinnati biologist Joshua Benoit traveled to this Land of the Midnight Sun to learn how Antarctica’s only true insect can survive constant freezing and thawing. He found that the midges have surprising adaptations for life in their wintry realm.

Benoit and his students presented their findings in January at the Society for Integrative and Comparative Biology conference in Tampa, Florida.

At some point in their evolution, the little midges lost their wings — possibly to cope with the notorious Antarctic winds. Since they eat abundant algae and never travel far from where they’re hatched, the flies don’t need to fly.

“You crawl around on the ground and dig in dirt, algae and moss until you find them,” said Benoit, an assistant professor in UC’s McMicken College of Arts and Sciences. “And because of the penguin colonies, there’s a lot of penguin excrement, too.”

Benoit has undertaken three scientific missions to Antarctica, conducting research out of Palmer Station in the U.S. Antarctic Program. Previously, he studied Antarctic ticks that feed on penguins and other sea birds.

For his latest project, Benoit examined the molecular mechanisms underlying the fly’s reproduction. Like other midges, adult flies mate in big swarms during the brief Antarctic summer. The females lay eggs that hatch about 40 days later. Then the newborn flies spend the next two years developing as larvae, entombed for much of the year in ice.

It’s only in their last week of life that they spread their wings, so to speak, as fully formed adults. They die just days after mating.

Scientists call them “extremophiles” for their ability to survive in extreme conditions.

“It could be living at a high elevation on a mountain — that’s extreme. Or if you live in an extremely salty environment,” he said.

Few creatures can survive the hostile conditions of Antarctica, Benoit said. The continent is home to a menagerie of tiny organisms such as mites and nematodes. It’s the tiny fly’s ability to withstand cold and dehydration that makes it an extremophile of Olympic proportions.

Scientists know that the midge larvae stay sheltered from the worst of Antarctica’s blinding sun and bracing cold by remaining under a protective layer of moss and soil. Here the temperature and humidity are relatively constant.

But during the Antarctic summer, daily temperatures can soar into the 40s and dip well below freezing. UC researchers wanted to know how the midge’s eggs tolerate such big temperature swings.

“The females secrete this clear jelly around the eggs. Essentially, it’s like antifreeze,” UC student and study lead author Geoffrey Finch said. “It acts as a temperature buffer against those fluctuations to help them survive.”

The gel also helps the eggs survive Antarctica’s other defining climate feature — its dryness. Antarctica is home to the world’s biggest desert. Belgica can survive even after losing more than 70 percent of its water content. By comparison, studies have found that people begin to suffer cognitive impairments when we lose as little as 2 percent of our water content through dehydration.

“So having all these unique adaptations is what allows them to live in this extreme environment,” Benoit said.

Materials provided by University of Cincinnati. Original written by Michael Miller. Note: Content may be edited for style and length.