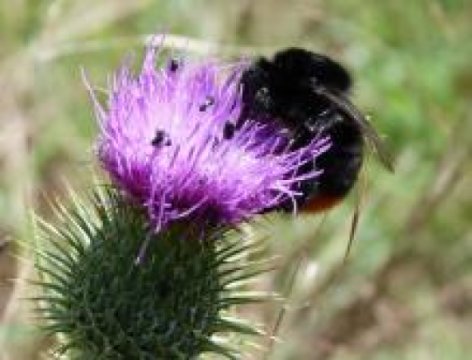 Insect pollinators that have survived the impacts of agricultural intensification may have a greater ability to resist future environmental changes than previously thought, a new study has found.

Pollination by insects, particularly bees, is vital to food production and humans because it affects the yield or quality of 75% of globally important crop types, but in recent years there has been increasing concern about the long-term stability of this service due to widespread declines in some species.

Despite the negative impacts of agricultural intensification on plants and insect pollinators, researchers at Centre for Ecology & Hydrology and the University of Reading found the species that remain in parts of the UK with a higher proportion of farmed land are more likely to survive a variety of potential environmental changes.

However, the research, published in the Ecology Letters journal, suggested that was because these landscapes have already lost their most vulnerable species, retaining those insect and plant species that are more able to take whatever is thrown at them.

The study drew on six million records from more than 30 years of citizen science data from thousands of volunteer naturalists, relating to sightings of species and visits to plants by pollinators such as bees, hoverflies and butterflies.

The latter records enabled researchers to identify 16,000 unique interactions between plants and pollinators across Great Britain and, for the first time, the extent of how these ‘ecological networks’ vary with different types of landscapes across the country.

John Redhead of the Centre for Ecology & Hydrology, the lead researcher of the new study, said: “We think that that the plants and pollinators that remain in these landscapes represent the toughest species that can handle the stresses of intensive agriculture — the vulnerable ones are already long gone.

“This means that they’re also able to cope with many future changes, so although we hear about reported declines our wildlife, this may buy conservationists some time before we start to see the remaining plants and pollinators in agricultural areas really suffer.”

The plants that have survived intensive agriculture include common weed species like brambles and thistles, which can cope with increased soil fertilization and reduced water availability.

Meanwhile, the insects that have fared better are ‘generalist’ pollinators that can feed on a wide variety of plant species, including crops and weeds, plus can cope with fewer and more scattered floral and nesting sites.

The study was funded by the Natural Environment Research Council (NERC).

Professor Tom Oliver of the University of Reading, one of the co-authors of the paper, says: “It is good news that the catastrophic loss of all species is less likely, but we still need to work hard to restore biodiversity to give these ecosystems the best chance under growing threats of climate change and pollution.”

Here are some examples of species who have either declined or survived under agricultural intensification:

Materials provided by Centre for Ecology & Hydrology. Note: Content may be edited for style and length.