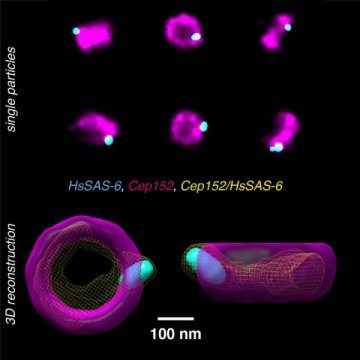 Super-resolution microscopy is a technique that can “see” beyond the diffraction limit of light. The technique has garnered increasing interest recently, especially since its developers won the Nobel Prize in Chemistry in 2014. By exploiting fluorescence, super-resolution microscopy now allows scientists to observe cells and their interior structures and organelles in a way never before possible.

Many of the molecular complexes inside cells are made up of multiple proteins. Since current techniques of super-resolution microscopy typically can only use one or two fluorescent colors, it is difficult to observe different proteins and decipher the complex architecture and underlying assembly mechanisms of the cell’s interior structures. An even greater challenge is to overcome the noise inherent to the super-resolution methods and fluorescent labeling, to achieve the full resolution potential.

Scientists from the lab of Suliana Manley at EPFL have now solved both problems by developing a new method to analyze and reconstruct super-resolution images and re-align them in a way that multiple proteins can be placed within a single 3D volume. The method works with images taken with large field-of-view super-resolution microscopy, with each image containing hundreds of two-dimensional projections of a labeled structure in parallel.

Each 2D view represents a slightly different orientation of the structure, so that with a dataset of thousands of views, the method can computationally reconstruct and align the 2D images into a 3D volume. By combining information from a large number of single images, the noise is reduced and the effective resolution of the 3D reconstruction is enhanced.

With the help of Pierre Gönczy’s lab at EPFL, the researchers tested the method on human centriole complexes. Centrioles are pairs of cylindrical molecular assemblies that are crucial in helping the cell divide. Using the new multicolor super-resolution reconstruction method, the researchers were able to uncover the 3D architecture of four proteins critical for centriolar assembly during organelle biogenesis.

The new approach allows for unlimited multiplexing capabilities. “With this method, if the proteins in the structure can be labeled, there is no limit to the number of colors in the 3D reconstruction,” says Suliana Manley. “Plus, the reconstruction is independent of the super-resolution method used, so we expect this analysis method and software to be of broad interest.”