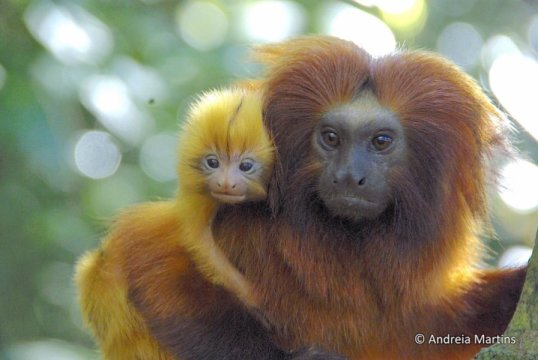 Why would males and females choose different reproductive strategies? For golden lion tamarins in the Brazilian rain forest, the answer may offer clues to help save this neotropical primate.

For conservationists, gaining an understanding of the ecology and behaviors of an animal population is vital for creating an optimal preservation strategy. But there are still many unexplored motives affecting the ways of life of a particular animal.

One major question researchers ask regards the dispersal patterns and social drivers of ‘natal emigration’: leaving a birthplace or group. Population dispersal is a crucial behavioral trait in animal societies, helping maintain the viability of each species.

To investigate, a research team from Japan and Brazil analyzed the dispersal patterns of the endangered golden lion tamarin, or GLT. Their study appears in the American Journal of Primatology.

However, this system leaves subordinate members with only limited options for reproduction: waiting for a breeding opportunity within the group, or ’emigrating’ out to search for potential mates.

READ  Researchers discovered in the Atlantic, the signs of global disaster

Emigration can increase reproductive opportunities, but also entails risks, such as facing predators and starvation.

The team analyzed data on the social habits of 68 groups — collected over seven years by an international conservation program — which revealed that, while both male and female GLTs emigrate out to maximize their dispersal success, their tactics differ. Successful males immigrate into other groups, whereas females form entirely new ones.

Males and females were also found to leave their natal groups because of attraction to external breeding opportunities. Additionally, weak social integration with other group members was found to add to male emigration.

The researchers hope that further investigation of the underlying mechanisms of natal emigration will assist in the design of management strategies for the conservation of other threatened species.