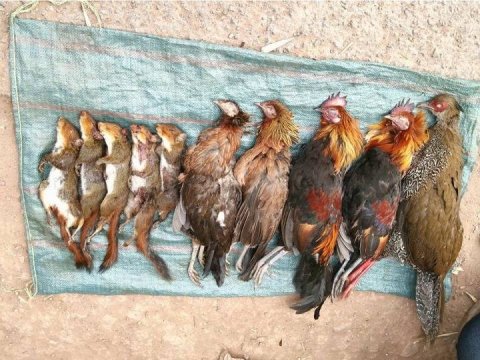 How many jobs should an applicant consider before accepting the next job offer? Turns out the same decision-making process that goes into searching for a job also applies to hunters searching for prey, and the knowledge can be used in conservation.

In a new study published today, researchers used a job search theoretical model to better understand hunters’ decision-making in order to develop conservation tools to address overhunting in the tropics, where more than three-quarters of all plant and animal species live.

Optimal decisions have been used in ecology to address questions about mate or food choice. In this case, an ecologist from the National Institute for Mathematical and Biological Synthesis and a mathematician from Princeton University used it to study hunter diet to determine the optimal stopping point.

Mathematically, the decision to shoot yields what the researchers called a “dietary trait threshold” — the point at which a desired trait such as large body mass or antler size is reached and leads the hunter to take a shot.

Globally, body size is an important determinant of prey value, the researchers wrote, and so it can help predict which species are threatened by overexploitation.

Tropical hunting tends to harvest a wide range of species, across mammals, birds and reptiles. The model is able to identify which ones are subject to hunting pressure. The opportunity cost of each hunting trip is factored in as well.

Chang and co-author Sarah Drohan, a doctoral student in applied mathematics at Princeton University, tested the model using data from the tropical rainforests of Southwest China, a biodiversity hotspot where several species, such as the Gaur and the Green peafowl, are under threat from overhunting.

The model could be used to infer whether there had been changes to harvested prey communities and to evaluate the efficacy of hunting regulations.

“The model was particularly informative and has the potential to simplify monitoring and management of overharvested areas,” Chang said.