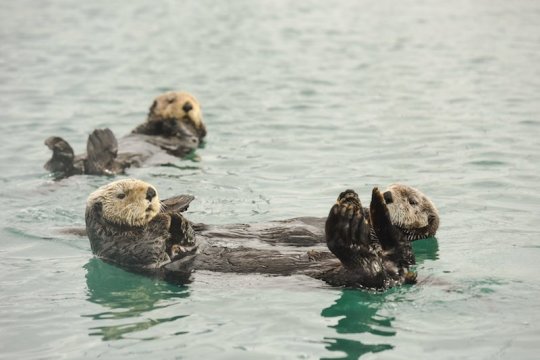 The sea otter’s low level of genetic diversity is similar to endangered species, such as the cheetah and Tasmanian devil, said lead author Annabel Beichman, a UCLA graduate student in ecology and evolutionary biology. She and her colleagues reconstructed the otter’s evolutionary history and assessed its level of genetic diversity, history of changes in its population size, and levels of potentially harmful genetic variation.

The biologists found evidence of potentially harmful genetic variation and of mating between closely related ancestors in the sea otter genome — a pattern that is common in endangered species with small population sizes. The team analyzed the genome of Gidget, a female sea otter from the Monterey Bay Aquarium who died this year, as well as the genome of a South American giant otter as an evolutionary point of comparison. There are 13 species of otters, and the sea otter and giant otter live in starkly different environments — the giant otter in a warm freshwater environment and the sea otter in the frigid coastal waters of the North Pacific Ocean. This study is the first comprehensive genomic analysis of otters.

“While low diversity isn’t necessarily dangerous by itself, we also found elevated levels of potentially harmful variation within genes, possibly due to a history of population declines — which could impact the population going forward,” Beichman said.

“Sea otters may be at risk,” said co-senior author Robert Wayne, a UCLA distinguished professor of ecology and evolutionary biology and a Howard Hughes Medical Institute professor. “This is a warning sign, a red flag. We should make sure to not let their population decline again.”

The team reported its findings June 18 in the journal Molecular Biology and Evolution.

Beichman compares the sea otter’s low genetic diversity to a jar of multicolored marbles that has lost many of its colors. “Having a large amount of diversity in the population, a lot of different colors of marbles, may be helpful if a disease arises or the environment changes — maybe green marbles are resistant to the disease, but blue and red are susceptible. But if you’ve lost all your green marbles by chance when the population declined, you may be stuck with only blue and red — and not able to resist the disease,” she said. “More variety gives you more shots at survival.”

While seals and sea lions have lived in the ocean for 30 million years, and whales and dolphins for more than 50 million years, sea otters have had only about 5 million years to adapt to their marine environment. “In evolutionary time,” Beichman said, “that’s a snap of the fingers.”

Whales, seals, sea lions and dolphins have a blubbery layer of fat to keep them warm in their environment of cold saltwater, but sea otters lack that layer. Instead, they have dense and water-repellant fur. Sea otters were hunted since the mid-1700s for their fur, almost to extinction. They numbered from 150,000 to 300,000 worldwide before the fur trade. Since the end of the fur trade, sea otter numbers are believed to be down to 1,000 to 2,000 worldwide.

Only about 50 southern sea otters survived in California in the early 20th century, down from 16,000 to 20,000 in the early 1700s, Wayne said. Now there are about 3,000 otters in California and sea otters are protected as a threatened species under the Endangered Species Act. Some sea otter populations went extinct, including those in Oregon and British Columbia.

“Sea otter populations crashed and we wanted to study the effects that had on its genome, as well as the effects of its marine environment on its genome,” said co-senior author Kirk Lohmueller, UCLA associate professor of ecology and evolutionary biology, and of human genetics.

The biologists found evidence of small changes in a set of nine genes that cumulatively are implicated in the evolution of the thick fur of the otters. The researchers are the first to identify these genes as important in otter evolution. The team also reported on 18 significant genes that may be related to such areas as reproduction, immune function, brain development and limb development. These genes are present across mammal species, but sea otters seem to have changes in these genes that may have benefitted them during their evolution, the researchers concluded.

Beichman, Wayne, Lohmueller and colleagues are currently conducting a follow-up study to sequence the 20,000 genes in 130 other sea otters from populations around the north Pacific Rim, including the Kuril Islands north of Japan, the Aleutian Islands, central Alaska and Baja California, Mexico.

The research was funded by the National Science Foundation, the Monterey Bay Aquarium, a National Institutes of Health Training Grant in genomic analysis and interpretation, UCLA’s Academic Senate and the UCLA Catalyst Program.

The complete list of co-authors may be found in the journal article.