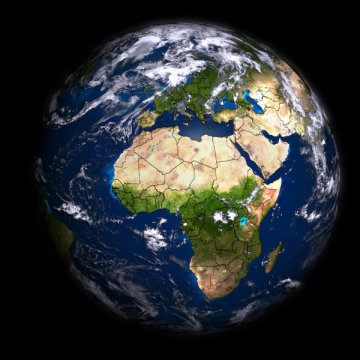 A vast region of Africa affected by drought and changing land use emits as much carbon dioxide each year as 200 million cars, research suggests.

Observations from two satellites have consistently shown emissions over northern tropical Africa of between 1 and 1.5 billion tonnes of carbon each year.

The data suggest stored carbon has been released from degraded soils — those subject to prolonged or repeated drought or land use change — in western Ethiopia and western tropical Africa, but scientists say further study is needed to provide a definitive explanation for the emissions.

Their findings improve understanding of greenhouse gas sources and aid efforts to meet the terms of the Paris Agreement, which aims to limit average global temperature rise below 2C.

The carbon source might have gone undiscovered with land-based surveys alone, according to a team led by researchers from the University of Edinburgh.

They compared readings with three atmospheric models showing changes in vegetation, and a host of other measurements of ground water, fire and levels of photosynthesis.

The study is the result of a decade of work, involving hundreds of dedicated engineers and scientists, and billions of dollars of investment by space agencies.

Professor Paul Palmer, of the University of Edinburgh’s School of GeoSciences, who led the study, said: “The tropics are home to one-third of Earth’s three billion trees and their stored carbon, and yet we are only scratching the surface of understanding how they are responding to changes in climate. We anticipate that satellite data will continue to improve that situation.”

The study, published in Nature Communications, was funded by the Natural Environment Research Council’s National Centre for Earth Observation. It also involved researchers from the University of Leicester, Laboratoire des Sciences du Climat et de l’Environnement (LSCE) in France, and Colorado State University in the US.