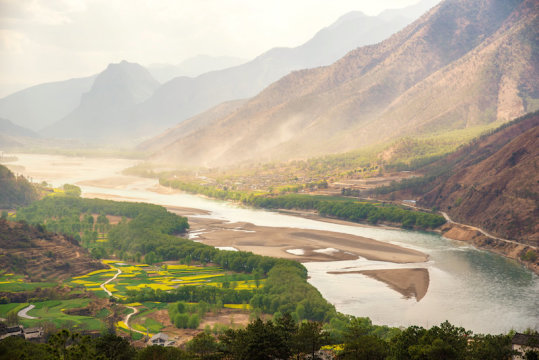 The Han Chinese are the world’s largest ethnic group, making up 91.6% of modern-day China. As DNA sequencing tools and statistical analyses software have advanced, scientists have been exploring the forces that helped shape the current genetic landscape of Han Chinese.

Now, in a new study drawing from the largest study to date of three generations of 21,668, unrelated Han Chinese DNA samples spread out over all provinces, lead author Qing-Peng Kong and his team, of the Kunming Institute of Zoology have shown the importance of how the three main river valleys in China contributed to Han genetic diversity. The study was published in the advanced online edition of Molecular Biology and Evolution.

From their DNA analyses, the team calculated the geographical distributions, and using mitochondrial DNA, (which is only passed down by mothers), also explored the maternal genetic structure of contemporary Han Chinese according to different classifications, including language dialects, geography and river valleys.

“Interestingly, the highest proportion of among-group variance (0.06%) was observed when classifying Han Chinese into seven groups according to river valleys, much higher than that between north and south (0.03%) or between different dialect groups (0.02%),” said Kong.

“When we excluded populations located across more than one river valley and focused on populations from the three main river valleys in China, i.e., Yellow, Yangtze and Zhujiang (Pearl) rivers, the highest proportion of among-group variance (0.07%) was observed, implying that more significant genetic divergence existed among Han populations based on river valleys.”

Kong’s team dated these patterns of genetic differences in Han Chinese, showing their first emerged around the late Holocene era about 10,000 years ago. This era corresponds with the last retreat of Ice Age glaciers, and coincides with the ancient forms of agriculture that were first developed and centered in the Yellow (millet, or cereal crops/grains), Yangtze (rice) and Zhujiang rivers (roots and tubers).

Their study, which used more diagnostic variants and more samples covering all provinces, has led to a better understanding of the maternally genetic landscape of Han Chinese.

“Our study implies that the maternal gene pools of contemporary Han Chinese populations have retained the genetic imprint of early Neolithic farmers from different regions, thus highlighting the important roles of the three ancient agricultural traditions in shaping the genetic landscape of Han Chinese,” said Kong.