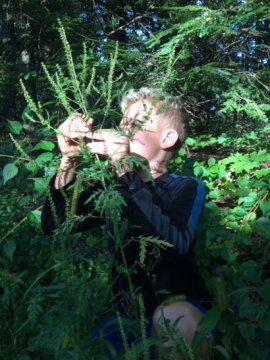 A new predictive model developed by an ecologist at the University of Massachusetts Amherst and a climate scientist at the University of Washington suggests that climate change may allow common ragweed to extend its growing range northward and into major northeast metro areas, worsening conditions for millions of people with hay fever and asthma.

Plant ecologist Kristina Stinson at UMass Amherst, who leads a research team that has been studying this plant for over a decade — particularly how it responds to elevated CO2 levels — worked with climate modeler and corresponding author Michael Case at UW on this project. Details appear online in the journal PLOS One.

They point out that though the weed is expected to expand its range, this could be moderated by the plant’s own sensitivity to climate variability. For example, they note that in their analysis, ragweed is negatively correlated to very low or very high annual precipitation variability, “indicating a general sensitivity to precipitation extremes” as well as temperature extremes, the authors note. Stinson adds that this could turn out to be an important uncertainty; “if the Northeast turns more wet and cool, it would be less hospitable to ragweed,” she says.

“One reason we chose to study ragweed is because of its human health implications. Ragweed pollen is the primary allergen culprit for hay fever symptoms in summer and fall in North America, so it affects a lot of people,” the plant ecologist notes.

To better understand how climate change may affect the distribution of common ragweed, Stinson and Case built a maximum entropy, Maxent, predictive model using climate and bioclimatic data and observations across the eastern U.S. They used data from the Denmark-based Global Biodiversity Information Facility, a project that provides hundreds of millions of species occurrence records worldwide, plus plant data from herbarium records like those housed at UMass Amherst.

Stinson says, “We zoomed in on 700 data points for ragweed from all across its range in North America, and paired that information with another database that specifies climate in each of those exact locations. We then used climate change models to project forward in time what might be expected to occur.”

The authors also point out, “After building and testing our model, we then projected potential future common ragweed distribution using a suite of 13 global climate models under two future greenhouse gas scenarios for mid- and late-century. In addition to providing geo-referenced hot spots of potential future expansion, we also provide a metric of confidence by evaluating the number of global climate models that agree.”

The model suggests a “substantial contraction” of common ragweed may loom in central Florida, the southern Appalachian Mountains and northeast Virginia, along with areas of potential expansion at the northern margins of its current distribution, in particular in the northeast U.S.

Stinson adds, “What I found quite interesting is not so much that ragweed’s range is going to expand, because that’s what one might expect for a weedy species, but I was interested in seeing where it is most likely to spread and where we might see range contractions. It looks like maybe there will be a temporary burst followed by a contraction in the 2070s.”

The researchers point out, “Although other factors and modeling approaches should be explored, we offer preliminary insight into where common ragweed might be a new concern in the future. Due to the health impacts of ragweed, local weed control boards may be well advised to monitor areas of expansion and potentially increase eradication efforts.”

Stinson points out, “We don’t have a lot of models like this that tell us where individual species may go under different scenarios. Ecologists are working on doing this type of study for more species, but there are not always enough data points from around the world; individual species data are rare. But ragweed happens to be quite abundant, which made this study feasible.”