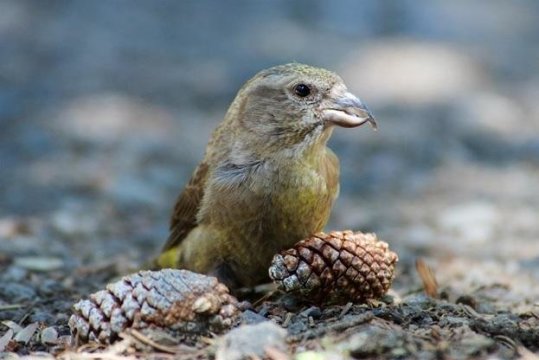 As might be expected for a recently discovered bird species in the continental United States — only the second in nearly 80 years — the Cassia Crossbill (Loxia sinesciuris) is range-restricted. It occurs in just two small mountain ranges on the northeast edge of the Great Basin Desert where it is engaged in a coevolutionary arms race with lodgepole pine. Based on a current paper in The Condor: Ornithological Applications, Cassia Crossbills occupy about 70 km2 of lodgepole pine forest and number only ~5,800 birds.

Not only are there relatively few of these crossbills, but earlier work showed that their population is vulnerable to hot summer days (>32?C or 90?F). Hot days can cause seeds in the fire-adapted lodgepole pine cones — the sole food of Cassia Crossbills — to be shed to the ground and effectively lost to the crossbills. After three summers with four or more hot summer days, Cassia Crossbills declined by over 80% between 2003 and 2011. Fortunately, hot summer days have been few in the last 10 years, allowing the crossbill population to rebound. However, the impact of these hot summer days may help explain why the recent study shows that Cassia Crossbills occur more commonly in larger mature stands of lodgepole pine present on the cooler north-facing slopes where cones are less exposed to such extreme temperatures and large numbers of seeds can accumulate in the cones.

Unfortunately, the outlook for the continued accumulation of seeds in closed cones in the canopy is bleak. More hot summer days are projected, along with increasing fire frequency, preventing pine from reaching the ages most productive for the Cassia Crossbill. “Maintaining mature lodgepole pine with lots of old, closed cones that the crossbills rely upon will be a challenge,” Craig Benkman, a co-author of the study, concedes. “However, a concerted effort is likely worthwhile, as these forests provide more than just great habitat for Cassia Crossbills.”