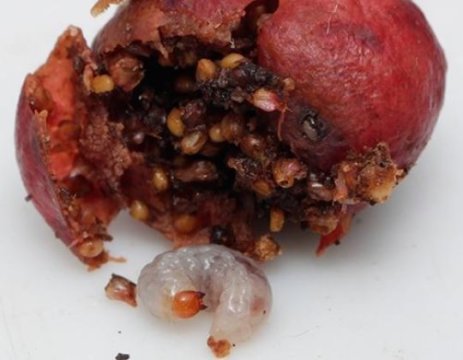 In an article published at journal Acta Oecologica, Brazilian biologist Luciano Palmieri Rocha has proposed a new phase of the development cycle of fig trees (Ficus carica) and their specific pollinators, fig wasps from the species Blastophaga psenes – one of the most studied cases when analyzing the evolution of mutualism.

“Many other organisms, including acarid mites, nematodes, and insects, manage to insert their eggs into figs without performing the biological role of pollination,” adds Palmieri. The larvae from these animals compete directly with those of fig wasps for food and space inside the fig or simply feed on them.

Supported by the São Paulo Research Foundation — FAPESP, Palmieri is affiliated to the Insect-Plant Interaction Laboratory belonging to the Biology Department of the University of São Paulo’s Ribeirão Preto School of Philosophy, Science and Letters (FFCLRP-USP), which is headed by Professor Rodrigo Augusto Santinelo Pereira.

Palmieri’s article is featured on a special edition of Acta Oecologica in tribute to the 50th anniversary of the original discovery of the fig-wasp mutualism. Since the late 1960s, when it began to be elucidated, the development cycle has been divided into five biologically based developmental phases (A, B, C, D and E) describing how the ripening fig becomes attractive to female wasps, which enter the inflorescence to lay their eggs, and how a new generation of fertilized female wasps eventually emerges from the fig to renew the cycle.

The evolution of mutualism shaped both species

The fig wasp’s reproductive cycle takes place only inside figs, which have changed so much due to their interaction with fig wasps over the course of tens of millions of years of evolution that today, they are thought to be fruit. However, a fig is not actually a fruit; it is an inverted inflorescence, a cluster of hundreds of tiny flowers contained inside a bulbous stem. The flowers produce seeds internally after being pollinated by fig wasps.

The mutualism is ancient, Palmieri explained. The oldest fossils of fig wasps date from 34 million years ago. They closely resembled the species alive today, indicating that the symbiotic relationship evolved early and has not changed fundamentally since then. Molecular evidence shows that the relationship existed 65 million years ago, suggesting that it might be even older, perhaps going back to the age of dinosaurs.

“At some point, the ancestors of fig wasps began laying eggs in the flowers of ancestral fig trees. We believe these inflorescences were still open, so they could be pollinated by various insects,” Palmieri said.

Over the course of at least 65 million years of evolution, the fig’s inflorescence became an enclosure sealed off from the outside world, and only the fig wasp was able to penetrate it.

“Initially, the wasp parasitized the fig, but then through some unknown evolutionary mechanism, the plant ended up co-opting the wasp’s parasitism and making it part of its own reproductive cycle,” Palmieri said.

The fig-wasp lifecycle begins when the female wasp enters the fig. “The fig is an urn that preserves and protects hundreds of tiny flowers. The flowers open inside it, so they need a special pollination process. They cannot rely on wind or bees to carry their pollen. That’s where the fig wasp comes in,” he explained.

The five phases of the cycle

Inside the fig, there are female and male flowers that develop at different times. The A phase occurs when the female flowers are not yet mature. They soon mature and are ready to be fertilized. They become receptive to the wasps and release a scent made up of a huge amount of volatile compounds, triggering the B phase.

Each fig receptacle is not entirely closed but has a small hole called an ostiole, through which the female wasp penetrates its interior. As it does so, it loses its wings and its antennae are broken, so that it cannot get out again. It lays its eggs and dies.

Once inside the fig, the female wasp lays eggs in many of the flowers but not all. At the same time, it fertilizes the flowers with pollen stored in a pouch on the underside of its thorax.

Now begins the C phase, which lasts two to three months. The flowers that receive pollen but no eggs develop into seeds. Flowers that receive eggs undergo a transformation to become hardened structures call galls, becoming nurseries with food and shelter for wasp larvae.

The D phase occurs at the end of larval incubation. This is also when the male flowers start to mature, opening up to expose pollen containers known as anthers.

“The opening of the male flowers is synchronized with the end of larval development. The first wasps to emerge from the galls are wingless males with reduced eyes but large strong mandibles,” Palmieri said. “They crawl over the female flowers until they find the galls containing the females, their sisters, now ready to emerge. The male penetrates the female with a telescopic penis and fertilizes the female inside the gall. Once they have mated in this way, the males use their mandibles to bite through the fig wall. They then go out through the hole, fall to the ground and die.”

The D phase ends when the female wasps emerge from their galls. “As they crawl toward the hole made by the male wasps, they pass over the male flowers and fill their pouches with pollen, with which they will pollinate other fig trees,” said the FAPESP-supported researcher.

Leaving the receptacle through the hole made by their brothers, the fertilized females fly away in search of other fig trees, and the cycle begins again. The E phase consists of seed dispersal through the feces scattered by the vertebrates that feeds from figs.

Evidence of the new F phase began to appear over the course of years of observation. “While studying the interaction between figs and fig wasps, we often found larvae of other creatures that played no role in the development cycle. These figs were discarded and left out of the research. In some cases, larvae that were almost the same size as the fig had eaten almost its entire contents. That’s when we decided to investigate what was going on,” Palmieri said.

“As some of these larvae reached adulthood, creatures no one recognized would start coming out of rotten figs on the ground. In the article just published, I describe 129 insects belonging to five orders and 24 different families that are not fig wasps but that also interact with figs, performing different functions.”

Palmieri identified ten species of wasps (Hymenoptera), 39 species of flies (Diptera), 46 species of beetles (Coleoptera), 17 species of cicadas and other bugs (Hemiptera), and 18 species of butterflies or moths (Lepidoptera).

These insects may colonize figs during different phases of the tree’s lifecycle. Some rely on fallen figs to complete their development. Palmieri divided the insects into two categories according to their role in the fig tree’s ecology and their potential impact on its reproduction. He called the categories “early fig interlopers” and “fallen fig fauna.”

One of the forms of early fig interlopers described in the article refers to the flies belonging to the genus Lissocephala, which lay eggs in the ostiole at the same time as the original female wasp is entering the fig. The fly larvae migrate to the interior of the fig and feed exclusively on yeast and bacteria brought inside by the pollinating wasp. The flies finish their development inside the fig and leave by the exit hole previously chewed in the fig wall by male wasps.

Butterflies and moths are the most aggressive group of insects in terms of the damage to figs. They lay eggs in the fig wall. In the C phase, their larvae bore through the fig wall and feed indiscriminately on fig pulp, wasps and seeds. The larvae destroy the hanging fig and crawl out to pupate in cocoons attached to branches of the tree.

In the case of fallen fig fauna, explained the FAPESP-funded researcher, the category comprises various organisms that feed on the fleshy parts or seeds of ripe figs not consumed by fruit-eating vertebrates. They take advantage of the window of opportunity created by the figs that fall under the parent tree in the F phase.

Fallen fig fauna consists mainly of beetles that feed on fruit remains. Beetles take advantage of the fig development cycle in various ways. Some colonize figs on the tree in the early C phase. Their larvae grow inside the figs and stay there when the ripe fruit falls to the ground. They then migrate to the soil, where they dig holes and pupate in cocoons.

“These examples give us just a glimpse of a far greater complexity of interactions. In addition to the evolutionary implications of pollination mutualism, an additional factor relating to the success of the 750-odd fig species is probably the highly diversified fauna of insects associated with fig trees, such as nonpollinating wasp species. Pressure from these parasitic wasps will have been, and continues to be, a key driver of fig species diversification,” Palmieri said.