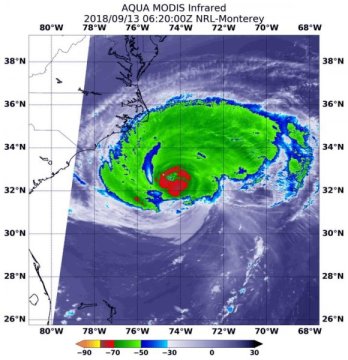 NASA’s Aqua satellite provided an infrared look at the large and powerful Hurricane Florence early on Sept. 13 that indicated wind shear was temporarily affecting the southern side of the storm.

Early on Sept. 13, NASA’s Aqua satellite’s infrared data showed the clouds in the southern quadrant of Hurricane Florence appeared warmer than storms throughout the rest of Florence. That means that the cloud tops are lower in the atmosphere, and the storms are not as powerful. That’s because vertical wind shear, the change of speed and direction of winds with altitude was buffeting the southern side of Florence and preventing the development of higher, stronger thunderstorms in that part of the storm.

NOAA’s National Hurricane Center (NHC) said “microwave overpass indicated that the convection over the southern and southeastern portions of the storm is still disrupted, and that the eyewall was open to the southeast. It appears that some southern shear has caused the degradation of the inner core. The global models suggest that this shear will relax today while Florence moves over warm waters, however, given the current storm structure, little overall change in strength is anticipated as Florence approaches the coast.”

At 2:20 a.m. EDT (0230 UTC) on Sept. 13, Moderate Resolution Imagine Spectroradiometer or MODIS instrument aboard NASA’s Aqua satellite analyzed Hurricane Florence in infrared light. MODIS found coldest cloud top temperatures in a tight band around the eye wall (the thunderstorms surrounding the open eye), as cold as or colder than minus 80 degrees Fahrenheit (F)/minus 112 degrees Celsius (C). Surrounding the eye were thick rings of powerful storms with cloud tops as cold as or colder than minus 70F (minus 56.6C).

NASA research has found that cloud top temperatures as cold as or colder than the 70F/56.6C threshold have the capability to generate heavy rainfall.

Watches and Warnings Already in Effect

At 8 a.m. EDT (1200 UTC), the center of the eye of Hurricane Florence was located by an Air Force Reserve reconnaissance aircraft and NOAA Doppler weather radars to be near latitude 33.1 degrees north and longitude 75.1 degrees west.

Florence is moving slower toward the northwest at about 12 mph (20 kph). This general motion, accompanied by a further decrease in forward speed, is expected to continue through today. A turn to the west-northwest and west at an even slower forward speed is expected tonight and Friday, and a slow west-southwestward motion is forecast Friday night and Saturday

Maximum sustained winds are near 110 mph (175 kph) with higher gusts. Little change in strength is expected before the center reaches the coast, with weakening expected after the center moves inland.