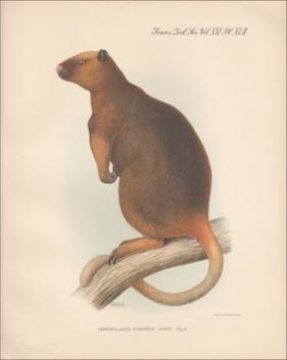 No one had reported seeing the strange creature — a cross between a bear and a monkey — since before the Great Depression. Then, this past summer, an amateur biologist stumbled upon the presumed-extinct Wondiwoi tree kangaroo while trekking through Papua New Guinea. The revelation underscored how little we still know about the natural world — a major obstacle to conservation.

A new Stanford-led study supports one approach to protecting all species in an area — the ones we know about and the ones, like the tree kangaroo, scientists don’t even know need protection. That conservation scheme focuses broadly on what are known as ecoregions. These are geographically unique regions, such as deserts and rainforests, that contain distinct communities of plants and animals.

Scientists have long debated how well ecoregion borders separate species communities. If the borders are strong, protecting an ecoregion, like a rainforest, would effectively protect all of the species within. If not, each species would need to be managed separately — a much more uncertain undertaking, especially when we don’t even know some species are there.

The new study, published in Nature Ecology & Evolution, provides compelling evidence that ecoregions do meaningfully divide plant and animal communities. This opens a path to new conservation approaches that more affordably and effectively protect little-known species, such as the tree kangaroo, and valuable natural services such as disease control and water filtration.

“Environmental conservation is limited by a lack of funding and other resources,” said study lead author Jeffrey Smith, a Stanford graduate student in biology. “Ecoregions give us a way to effectively allocate that limited funding.”

Robust, scientifically based conservation depends on in-depth information about species, their habitats and their population numbers — a level of detail absent for the overwhelming majority of species and places around the world. Looking for a way to bridge the gap, Smith, Daily and their coauthors did a deep dive into plant and animal biodiversity data from sources such as the U.S. Forest Service and the Global Biodiversity Information Facility, a clearinghouse for data from citizen scientists, museums and researchers.

From that, they unearthed support for thinking about all species — even highly mobile animals — as being clustered together in ecoregions around the globe. These results go far beyond previous work, which primarily characterized ecoregions by plant communities alone.

“These are crucially important findings,” said study coauthor Gretchen Daily, a Stanford biologist. “They illuminate where and how to invest in conservation and restoration for people and nature.”

The future of Earth’s life-support systems hinges on vast yet little studied regions of the planet. Establishing that ecoregions meaningfully divide different types of communities allows scientists and decision-makers to think more critically about conservation plans for these realms. This holistic approach to protecting biodiversity ensures we can better safeguard natural services, such as crop pollination and pest control, that are made possible by diverse ecosystems of plants, insects, fungi and small vertebrates.

The authors argue that ecoregions are one of many factors that should be considered when developing a cohesive conservation strategy. It’s an approach already in play at some major global conservation organizations, such as The Nature Conservancy and WWF, as well as federal agencies, such as the U.S. Environmental Protection Agency.

“As long as environmental conservation is limited by a lack of funding and other resources a key scientific and practical question is how to most effectively allocate limited funding to maximize conservation gains,” Smith said.