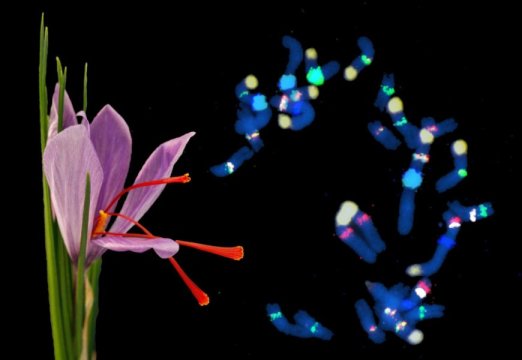 With a price tag of up to 30,000 euro per kilogram, saffron is the most expensive spice in the world. Sometimes it even exceeds the price of gold. Its typical aroma is produced by the apocarotenoid Safranal. Saffron is harvested from the flowers of the saffron crocus (Crocus sativus), which blooms solely in autumn. In order to yield one kilogram of saffron — skilled pickers can collect 60 to 80 grams per day — 150,000 to 200,000 flowers must be harvested by hand. Subsequently, the three stigmas of each flower are also separated manually and dried. These threads then constitute the spice saffron. Approximately 200 tonnes of saffron threads are harvested worldwide each year.

For many farmers in Mediterranean countries, Kashmir, India, Afghanistan, Iran and Pakistan, the production of saffron is the main source of income, since the saffron crocus also thrives in soils that cannot be utilised for agriculture. Even in the vicinity of Dresden, the cultivation of saffron has been recently restored after a centuries-long interruption that began in 1570. These local growers swear by the excellent quality of German saffron. Frost makes the plants more robust and the filaments more fragrant. Over the past millennia, saffron has been used as a spice, dye and as a medicine to treat rheumatism and alcohol addictions. For example, saffron was also used as a painkiller during childbirth and for “lady’s malaise.” According to Greek mythology, Zeus slept on a bed of saffron. In the 14th century “Saffron War of Balsthal,” Swiss merchants were even ambushed and robbed.

Due to its immense value, ground saffron is frequently adulterated by the addition of substances such as pollen from other flowers. Experts therefore advise consumers to buy whole threads.

The saffron crocus is a triploid hybrid species, is sterile and cannot be bred. Although it has been cultivated for more than 3,500 years, all plants cultivated worldwide originate only from daughter bulbs. For almost 100 years, there has been controversy as to the possible parent species of the saffron crocus are. If the parent species were known, changes could be inserted into the crocus genome by new breeding.

It is precisely this mystery that Dresden biologists have now solved. “We have managed to understand the origins of the saffron crocus and shed light on the parent species using molecular and cytogenetic methods,” says Thomas Schmidt, Professor of Plant Cell and Molecular Biology at TU Dresden’s Institute of Botany. “Our paper Adding color to a century-old enigma: multi-color chromosome identification unravels the autotriploid nature of saffron (Crocus sativus) as a hybrid of wild Crocus cartwrightianus cytotypes was accepted for publication in the journal New Phytologist. The paper is the title story for the April print issue and the source of the cover picture for the edition published on 8th May.”

The saffron crocus therefore is descended from only one species, the wild species Crocus cartwrightianus that is found in Greece. Through saffron crocus genome sequencing and comparative chromosome analysis (Fluorescence in situ hybridization, FISH) of different crocus species, Dresden biologists were able to demonstrate that genomes of two Crocus cartwrightianus individuals with slight chromosomal differences are fused. These findings conclude the centuries-long search for the origins of this mythical plant.

By the way: In order to preserve the fragrance, saffron should not be cooked for long. It is best to soak the threads in warm water for a few minutes and add them to the dish with the liquid when it is almost finished cooking. An even more intense colour can be obtained if the saffron threads are freshly ground.