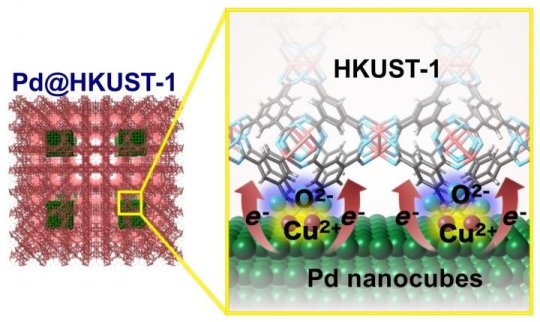 NIMS, Kyushu University and Kyoto University jointly identified a mechanism by which a hybrid material composed of palladium (Pd) and metal-organic frameworks (MOFs) is capable of storing approximately twice as much hydrogen as a material composed solely of Pd. The greater hydrogen storage capacity of the hybrid material is associated with a slight change in its electronic state caused by the transfer of an electric charge — amounting to approximately 0.4 electrons — from the Pd to the MOFs. The joint research team therefore successfully determined the quantitative relationships between the materials’ electronic states and their hydrogen storage properties. These findings may facilitate the development of new hybrid materials with superior hydrogen storage properties or with the capability to efficiently catalyze hydrogenation reactions.

Hybrid materials composed of transition metal nanoparticles and MOFs are potentially capable not only of storing large amounts of hydrogen but also of efficiently catalyzing hydrogenation reactions. The methods developed and used in this study to measure and analyze electronic states may accelerate the development of new hybrid materials with greatly increased hydrogen storage and catalytic capabilities.

Materials provided by National Institute for Materials Science, Japan. Note: Content may be edited for style and length.