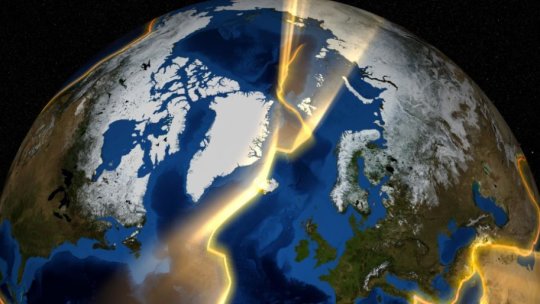 By mapping the heat escaping from below the Greenland Ice Sheet, a NASA scientist has sharpened our understanding of the dynamics that dominate and shape terrestrial planets.

Dr. Yasmina M. Martos, a planetary scientist at NASA’s Goddard Space Flight Center in Greenbelt, Maryland, mined publicly available magnetic field, gravity and other geologic information for clues about the amount and distribution of heat beneath the portion of the North American continent that is Greenland.

Her resulting heat map exposed a thermal track beneath Greenland that records the movement of a continent through Earth’s history.

Greenland is thought to have slowly moved over a mantle plume, a source of great heat, which left a diagonal scar of warm, dense rock below the surface as the tectonic plate shifted. Greenland moved from a more southern latitude toward the Arctic over 100 million years, a period when the supercontinent Pangaea was breaking up into the drifting continents of today. Eventually, the plume is thought to have formed Iceland above the surface of the ocean through countless volcanic eruptions — a visible trace of the plume’s existence, in contrast to Greenland’s hidden scar.

“I don’t think there is any other place on Earth where a plume history has been recorded by a piece of continent that hasn’t been affected by it at the surface,” Martos said. “But it’s there, so we can use thermal heat to understand the history of the region.”

Tracking these geodynamics of planets helps scientists understand their evolution. But more immediately, the heat information feeds sea-level-change models on Earth by helping scientists predict the behavior of ice. This is particularly important for the surface of land that, in the case of Greenland, is buried below kilometers of ice and so is hard to get to. More than 80 percent of the Greenland is covered by ice.

In an Aug. 1 Geophysical Research Letters paper, Martos and her team mapped the geothermal heat flux, or rate of heat escape, in Greenland. Their models, surprisingly, showed regional variations, plus a path of heat along a peculiar route from the northwest to the southeast of the island.

“We would expect Greenland to have a more uniform signal of geothermal heat flow in its interior, but that’s not the case,” said Martos, the lead author on the paper.

Because the northwest region of Greenland moved off the plume earlier it appears in Martos’ models to be significantly cooler than the southeast. Though the southern region is slowly cooling off.

“The nice thing is that the heat is recorded there now, but probably in a hundred million years we’re not going to see that anymore,” Martos said.

A similar plume formed the Hawaiian Islands and is currently fueling the K?lauea volcano eruptions. The Hawaiian chain of islands and seamounts that were created when the Pacific Plate moved over the plume in the middle of the Pacific Ocean is a visible representation of the type of scar that Martos found beneath Greenland.

The heat beneath Earth’s surface

Plumes are one of several geothermal heat-transporting phenomena on Earth; their number is uncertain, but scientists think there could be as many as 20. Otherwise, the inner planet is heated evenly throughout by decaying radioactive elements in Earth’s top layers. There’s also primordial warmth left over from the formation of our planet 4.5 billion years ago, and from the meteorites that pummeled it. The team considered these heat sources, Martos said, but ruled out their role in producing the scar because they would have formed a uniform heat pattern across Greenland.

Another factor that can increase heat in a specific location is tectonic activity. This activity includes rifting — or the breaking apart of continental plates, which creates space for warmer mantle to bubble to the surface — and volcanic eruptions. But these phenomena also didn’t square with the team’s findings, said Martos, given that Greenland is a craton, or an ancient piece of continent with no major tectonic events on record there.

Measuring heat without touching the surface

Because Greenland is covered by an ice sheet that is up to 1.8 miles (3 kilometers) thick in the center, getting physical samples from the ground below the ice is nearly as difficult as getting them from the Moon. Remotely sensed data offers virtually the only window to Greenland’s subsurface dynamics.

Martos’s team decided to look at magnetic field information collected by magnetometers, instruments flown by airplanes that measure the strength of the magnetic field of Earth. The data revealed anomalies in the magnetism of rocks below Greenland.

Magnetism is related to temperature, thus rocks heated to certain temperatures lose their magnetism. This typically happens deep inside Earth. Because magnetite is the most abundant magnetic mineral in the lower part of the crust, the researchers studied that mineral exclusively. Magnetite loses its ferromagnetic properties, or magnetism, when heated to 1,076 degrees Fahrenheit (580 degrees Celsius), a point known as the Curie temperature. Accounting for this temperature’s effect on magnetite allowed the team to find the base of magnetism in the crust of Greenland. From there, they observed the depth variations of the location of the Curie temperature for magnetite to map the heat released all over the island.

READ  Research: Detective mission to characterize and trace the history of a new African meteorite --

Along the plume’s path, the team found that the Curie temperature occurred closer to the surface. This offered evidence that the plume had heated the bottom of the lithosphere, and that the heat was still there.

The team also used gravity data to model the features of the lithosphere and confirm the plume’s effect on crustal thickness.

In the central part of the island, the team estimated geothermal heat flux values around 60 to 70 milliwatts per meter squared, or up to 50 percent higher than the heat escaping parts of the island not affected by the plume. This is a tiny amount; a 100-watt light bulb, by comparison, generates three orders of magnitude — or 1,000 times — more heat.

Still, said Martos and her co-authors, the heat they found can melt ice at the base of the Greenland Ice Sheet. It does not, however, contribute to the accelerated melting of Greenland’s glaciers. Because the geothermal heat declines over such huge periods of time — tens of millions of years — there has likely been no change in heat flux since the ice fully formed on Greenland about 3 million years ago.

Martos’ modeling tools will help scientists better understand the effect of below-surface heat on things like melt or breakage at the base of ice sheets and glaciers on Earth. It will also help them study remote locations on Earth and other rocky bodies in our solar system.

Martos began this research while she was a Marie Curie fellow of the European Union at the British Antarctic Survey.