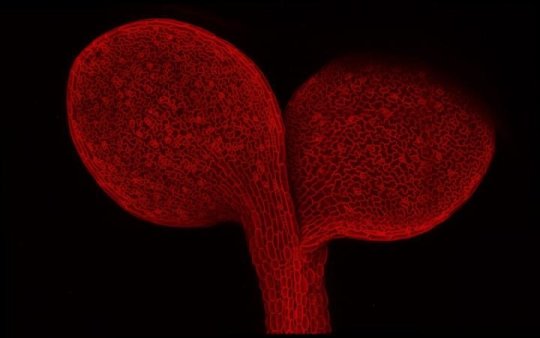 As the world heats up, plants face a dilemma — the same tiny holes they have to open to exchange gases also let out water. They can close the holes, called stomata, to stay hydrated in hotter, drier conditions but, in doing so, may miss out on critical carbon dioxide.

The question for the Bergmann Lab at Stanford University is how this dilemma will play out as increasing portions of the world’s plants experience consistently warmer, drier environments. Figuring that out required the group to take a step back and better understand how plants regulate the number of stomata each leaf develops. The answer not only suggests opportunities for engineering plants to withstand climate change, but also has uncovered a previously unknown process by which plants fine-tune the amount of stomata they build.

“It would be really nice to be able to better predict how vegetation, such as boreal forests, will react to global changes in climate. Changes in stomatal development are a type of mechanism plants probably use to adapt when the environment changes, but we have a lot more to learn about it,” said Anne Vatén, a postdoctoral scholar in the lab of Dominique Bergmann, a professor of biology in the Stanford University School of Humanities and Sciences.

In a paper published Sept. 6 in Developmental Cell, the researchers worked out which hormone in the plant Arabidopsis thaliana coordinates the number of stomata the plant produces. What’s more, they tweaked the levels of that hormone in the plant — using CRISPR/Cas9 gene editing technology — to get an idea of the extent to which this hormone can increase or decrease the presence of stomata.

The group started by examining the influence of cytokinin, an important plant hormone that was long thought to influence stomatal development and coordinate it with other processes happening throughout the plant. Vatén, who is lead author of the paper, analyzed the entire genome of A. thaliana and confirmed that genes associated with cytokinin were indeed highly active in cells that were about to become stomata. Then, by dialing up or down the levels of this hormone in specific cells in hundreds of laboratory plants, the researchers found they could subtly alter the number of stomata the plant makes.

What’s more, they traced precisely how cytokinin works in this context. It activates a gene called SPEECHLESS that puts cells on the path toward becoming stomata. But this path is not direct — the early steps involve stem-cell-like divisions that are capable of expanding the pool of cells destined for stomata. Through their experiments, the researchers found that while SPEECHLESS pushed more cells toward becoming stomata, it also activated four proteins that throttled cells’ ability to respond to cytokinin.

Although changing cytokinin levels consistently affected stomata, the researchers found that the effect was never very dramatic — completely eliminating the proteins they identified, for example, only changed stomatal numbers by about 10 percent. With this finding, the group was curious whether the rather moderate 10 percent increase in stomata was meaningful. Poring over previous research on growing plants in extreme environments, Bergmann noticed experiments where scientists doubled the normal levels of carbon dioxide in the atmosphere of plants and observed the effect on stomata. In studies that included hundreds of individuals representing dozens of species, the response was to decrease the number of stomata on their leaves, on average, by about 9 percent.

“That was a really satisfying discovery,” said Bergmann, who is also a Howard Hughes Medical Institute investigator and senior author of the paper. “It was great to be able to say that the changes we see in stomatal numbers when plants lose the ability to use the cytokinin-SPEECHLESS system is in the realm of how much plants normally change to cope with an environmental change.”

The researchers used CRISPR/Cas9 gene editing technology to precisely alter single genes in their plants to increase and decrease the cytokinin levels. This technology is very promising to be able to make directed small changes to improve plants’ ability to withstand climate change, said the researchers. Recently, however, the European Union decided that plants modified through CRISPR should be subject to the same strict laws as plants modified through older and less precise methods. Bergmann’s experience with both makes her question that decision, especially, she said, because plants subject to mutagenesis breeding, a much older and much more invasive procedure, are exempt.

“It’s important to discuss how genetic information is changed naturally and through various techniques like CRISPR/Cas9, and for scientists to keep the emphasis on improving plants more for the benefit of people than the corporate profits,” said Bergmann, “but I think the current EU ruling is short-sighted.”

Along the lines of personalized medicine, the researchers predict that plant biologists will become increasingly interested in small changes scientists can produce in plants through genetic editing.

The next step of this work will be to see how the cytokinin hormone links development of stomata to that of the vascular system, and both to specific environmental changes, like drought. Meanwhile, the Bergmann lab is already looking at how other plant hormones regulate stomata.

Co-authors of the paper include Cara Soyars and Zachary Nimchuk of the University of North Carolina and Paul Tarr of Caltech and the Howard Hughes Medical Institute.