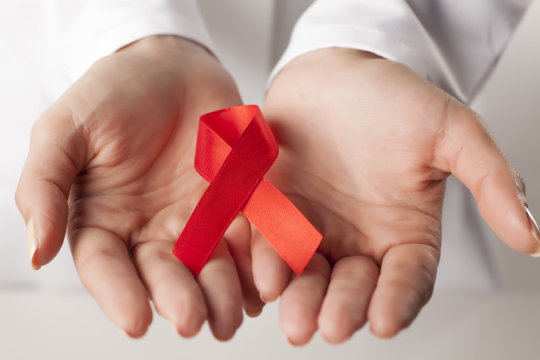 For more than 20 years, scientists at Scripps Research have chipped away at the challenges of designing an HIV vaccine. Now new research, published in Immunity, shows that their experimental vaccine strategy works in non-human primates.

The new study shows that rhesus macaque monkeys can be prompted to produce neutralizing antibodies against one strain of HIV that resembles the resilient viral form that most commonly infects people, called a Tier 2 virus. The research also provides the first-ever estimate of vaccine-induced neutralizing antibody levels needed to protect against HIV.

“We found that neutralizing antibodies that have been induced by vaccination can protect animals against viruses that look a lot like real-world HIV,” says Dennis Burton, PhD, chair of Scripps Research’s Department of Immunology and Microbiology, and scientific director of the International AIDS Vaccine Initiative (IAVI) Neutralizing Antibody Center and of the National Institutes of Health’s Center for HIV/AIDS Vaccine Immunology and Immunogen Discovery (CHAVI-ID).

Although the vaccine is far from human clinical trials, the study provides proof-of-concept for the HIV vaccine strategy Burton and his colleagues have been developing since the 1990s.

The goal of this strategy is to identify the rare, vulnerable areas on HIV and teach the immune system to make antibodies to attack those areas. Studies led by Scripps Research scientists have shown that the body needs to produce neutralizing antibodies that bind to the virus’s outer envelope protein trimer. To support this idea, scientists found that they could protect animal models from HIV by injecting them with neutralizing antibodies that were produced in the lab.

The challenge then was to get animals to make the neutralizing antibodies themselves. To do this, scientists needed to expose the immune system to the envelope protein trimer, effectively training it how to spot this target and produce the right antibodies against it.

But there was a big problem. The HIV envelope trimer is unstable and tends to fall apart when isolated. How could scientists use it as an ingredient in a vaccine? A breakthrough came in 2013, when scientists genetically engineered a more stable trimer, or SOSIP.

“For the first time, we had something that looked pretty much like the HIV envelope protein trimer,” says Matthias Pauthner, PhD, a research associate at Scripps Research and co-first author of the new study.

The scientists quickly moved forward with designing an experimental HIV vaccine that contained this stable SOSIP trimer. Their goal with the new study was to see if this kind of vaccine could actually protect animals from infection.

The team tested the vaccine in two groups of rhesus macaques. A previous study using the same vaccine had shown that some immunized monkeys naturally developed low neutralizing antibody titers (antibody levels) in their bodies, while others developed high titers following vaccination. From this study, the researchers selected and re-vaccinated six low titer monkeys and six high titer monkeys. They also studied 12 unimmunized primates as their control group.

The primates were then exposed to a form of the virus called SHIV, an engineered simian version of HIV that contains the same envelope trimer as the human virus.

This particular strain of the virus is known as a Tier 2 virus because it has been shown to be hard to neutralize, much like the forms of HIV circulating in the human population.

The researchers found that the vaccination worked in the high titer animals. The monkeys could produce sufficient levels of neutralizing antibodies against the envelope protein trimer to prevent infection.

“Since HIV emerged, this is the first evidence we have of antibody-based protection from a Tier 2 virus following vaccination,” says Pauthner. “One question now is how can we get such high titers into every animal?”

The focus on titers became especially important as the researchers saw HIV protection wane as the high titers fell in the weeks and months following vaccination. In tracking the titers while continuously exposing animals to the virus, the researchers determined the titers needed to keep HIV at bay.

Importantly, the study also showed that neutralizing antibodies, but not other aspects of the immune system, were the key to stopping the virus. Pauthner says this is an important finding, since other labs have focused on the potential for T cells and other immune system defenses to block infection.

Going forward, the scientists are looking to improve the vaccine design for human trials and keep titers high. “There are many immunological tricks that can be explored to make immunity last longer,” says Pauthner.

The researchers are pursuing a strategy to elicit broadly neutralizing antibodies (bnAbs) that can neutralize many strains of HIV, rather than the single strain described in these studies. “This research gives an estimate of the levels of bnAbs that we may need to induce through vaccination in order to protect against HIV globally,” says Burton.