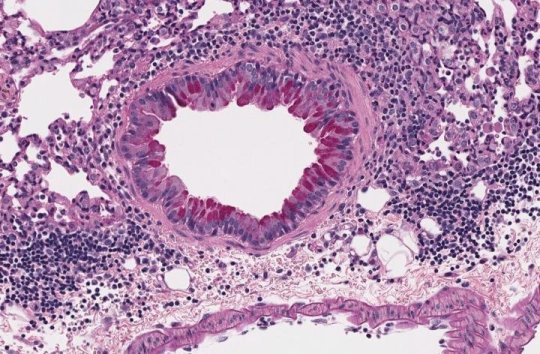 A non-pathogenic fungus can expand in the intestines of antibiotic-treated mice and enhance the severity of allergic airways disease, according to a study published September 20 in the open-access journal PLOS Pathogens by David Underhill of Cedars-Sinai Medical Center, and colleagues. The findings suggest that alterations in gut microbiota induced by intestinal fungi might be a previously unrecognized but potentially important risk of antibiotic therapy in patients with asthma and other respiratory diseases.

The microbiota is the ecosystem of bacteria, fungi, viruses, and other microorganisms that live in and on us. The intestines are where most of these organisms reside, and the composition of the intestinal microbiota has a profound effect on immune system function throughout the body. Many fungal species commonly found in the human gastrointestinal tract are triggers of allergic respiratory illness when inhaled. The overgrowth of intestinal Candida albicans — an opportunistic pathogenic yeast that is a common member of the human gut flora — has been previously observed to exacerbate allergic airways disease in mice. But it is less clear whether subtler changes in intestinal fungal microbiota can affect allergic airways disease.

In the new study, Underhill and colleagues observed that the expansion of a certain species of house dust fungus (Wallemia mellicola) can occur in the intestines of mice after they are treated with antibiotics and exposed to the fungus. By contrast, mice with an intact and healthy intestinal microbiota resist this expansion. After expansion of this fungal population, the mice are more prone to develop asthma-like inflammation in their lungs when exposed to allergens. Although it is not known whether the same phenomenon can occur in people with asthma, the researchers also show this fungus is a component of the microbiota of some healthy humans.

Further studies are needed in humans, but the findings may have important clinical implications. Patients with severe asthma receive frequent courses of broad-spectrum antibacterial medications for a variety of indications throughout their lifetime. These individuals may be exposed to Wallemia during a course of antibiotic therapy because these organisms are common environmental and food-spoilage fungi. “Unfortunately, eliminating W. mellicola from the intestines of these patients is not as simple as taking an antifungal medication, which can disrupt the balance of the intestinal microbial community and may similarly worsen allergic airways disease,” Underhill said.