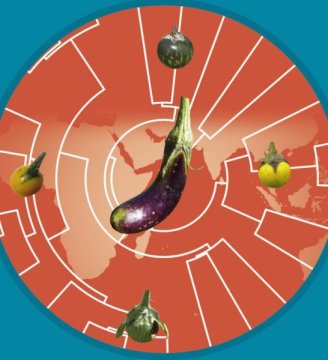 The evolutionary context of the eggplant was until recently very poorly known. Historical documents and genetic data have shown that the eggplant was first domesticated in Asia, but most of its wild relatives are from Africa. Researchers from the Natural History Museums of London (NHM) and Finland (University of Helsinki) managed to obtain the first well-supported hypothesis on the origin of the eggplant and its direct relatives.

In a study published in the American Journal of Botany, researchers from the Natural History Museum of London (NHM) and the Finnish museum of natural history, University of Helsinki, have sequenced the plastomes of the eggplant and of 22 species directly related to the eggplant. By comparing the plastome DNA sequences, they hoped to reveal the evolutionary history of the eggplant and its wild relatives. The team obtained a well-supported hypothesis on the origin of the eggplant and its wild relatives, and showed how a single event gave rise to two lineages, one comprising an African group of species and the other the wild progenitor of the domesticated eggplant.

“Nearly all species of the group of the eggplant inhabit low land savannahs and more or less arid habitats; some species are very widespread across Africa. Our results suggest that there had been a dramatic expansion of the distribution range of the group over the last two million years.” says the first author of the paper, Xavier Aubriot.

Eggplant’s history has been obscure

The eggplant (Solanum melongena) is a species that is a member of the giant genus Solanum (around 1,400 species) within the nightshade family (Solanaceae). Solanum also accounts for two other globally important food crops, the tomato and the potato. But in contrast to these New World crops, the eggplant hails from Asia. Historical documents and genetic data have shown that the eggplant was first domesticated somewhere in the region of China and India. It is only recently, however, that taxonomists have resolved the status of the wild species that are related to the cultivated eggplant — surprisingly many of them are found in the savannahs of Africa.

“Understanding the evolutionary history of a group depends upon detailed research using the collections of museums like the NHM” says Sandra Knapp of the Natural History Museum, “Resolving the identities of the wild species allows us to work out where they occur, which then allows us to dig deeper into the factors that determine their current status.”

The team found that the group containing the relatives of the eggplant originated in northeastern Africa some two million years ago. Plants then dispersed both eastwards to tropical Asia and southwards to southern and western Africa. In tropical Asia, the dispersal event gave rise to a species that scientists call Solanum insanum. It is from populations of this wild species that the eggplant was later domesticated. What really startled the researchers was the fact that the dispersion of the group to Asia seemed to result from a single dispersal event from northern Africa to tropical Asia rather than a linear step-wise expansion from Africa to Asia.

Explaining the current wide distribution of eggplant relatives across Africa

Some of the African wild relatives of the eggplant have extremely wide distributions — Solanum campylacanthum occurs all along the eastern part of the continent, from Kenya to South Africa. During the investigation of the factors that could explain this pattern, it turned out that this could have something to do with the dispersion of the seeds. The African elephant and the impala, both inhabitants of African savannahs and with historical distribution ranges that encompass the continent, are both known to eat the fruits and disperse the seeds of these wild eggplant relatives. If today the range of African elephants is drastically reduced due to human activities, wild eggplant relatives may suffer as well. “If we want to secure eggplant production by tapping into the gene-pool of its wild relatives we have to protect African elephant populations.” says Péter Poczai researcher of the Finnish museum of natural history, University of Helsinki.

“This study is actually a first step for deeper analyses” summarizes Aubriot. “Many important questions remain to be investigated — how did the eggplant group reach tropical Asia? Were there interactions between early humans and wild eggplant relatives? What factors were involved in the domestication process of the eggplant from its wild progenitor, Solanum insanum? We are now working on getting a much improved sampling and new sources of data to shed more light on the complex and interesting origin of the eggplant.”