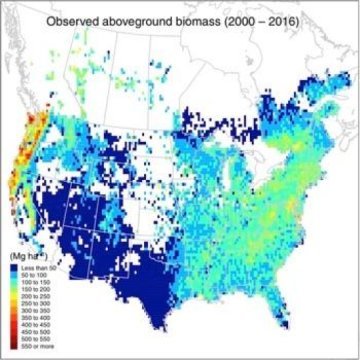 Researchers have calculated the capacity of North American forests to sequester carbon in a detailed analysis that for the first time integrates the effects of two key factors: the natural process of forest growth and regeneration, and climate changes that are likely to alter the growth process over the next 60 years.

The result is a compelling picture that’s of great value, because forests play a critical role in mitigating the effects of climate change. Trees absorb carbon dioxide from the atmosphere as they grow, storing the carbon in their wood.

“There’s a lot of hope that our forests will soak up the carbon dioxide we’re producing, but the capacity of our forests is limited,” said lead researcher Kai Zhu, an assistant professor of environmental studies at the University of California, Santa Cruz.

Zhu’s team found that North American forests have reached 78 percent of their capacity to sequester carbon and will gain only 22 percent capacity — at most — over the next 60 years. That’s a cautionary finding that has implications for forest managers, climate scientists, and policy makers.

Unlike previous attempts to quantify forests’ capacity to sequester carbon, which relied on simulation models or satellite data, Zhu’s findings are based on exhaustive, ground-based measurements of forests across the continental United States and Canada.

He analyzed data from 140,000 plots in the U.S. Forest Inventory and Analysis program and the Canada Permanent Sample Plots program to document the historical growth of forests and project their growth into the future. But he knew he couldn’t produce an accurate forecast without also accounting for climate change.

“To do a good job predicting the future, we have to consider both factors — natural recovery and climate change that modifies growth — because both are important biologically,” he said.

Zhu’s predictions are based on a complex growth model that incorporates contemporary data from 2000-2016 and “hindcast” observations from 1990-1999. He then used the model to predict forest conditions under climate change scenarios in the 2020s, 2050s, and 2080s, before quantifying the extent to which current forest biomass approaches future biomass potential.

“We found that climate change effectively modifies the forest recovery trajectory, but the bigger factor is that overall forest growth is limited,” said Zhu.

Zhu’s findings represent the “best-case scenario,” because they reflect idealized assumptions based on past forest performance and climate-change projections from the Intergovernmental Panel on Climate Change.

“The assumption was that existing forests will happily grow without future disturbances, but in reality, there will likely be disturbances,” explained Zhu.

Such disturbances could include disease outbreaks, and wildfire and wind effects, as well as human-caused effects such as the loss of forests to development. Every time disturbances occur, it will reduce forest biomass, so the actual forest capacity is likely to be lower than the best-case scenario from this analysis.

“This is the first time wall-to-wall, ground-based data across North America was used,” said Zhu. “We haven’t had detailed knowledge about this carbon sink until now, so this is a starting point to think about the future.”

The findings point to the need to protect North American forests and reduce deforestation elsewhere, said Zhu. “Reducing deforestation in the tropics is much easier than expanding forests in North America,” he added. “That option is very limited.”

Forest recovery over the centuries

For Zhu, the past offered clues to the future. The backdrop of his work is based on the dramatic recovery of North American forests since the early 20th century following the removal of huge swaths to make way for agriculture, especially in the Northeastern United States. Better soils in the Midwest led to the abandonment of much of that cleared land, setting the stage for the recovery of forests.

“Forests in the Northeast have recovered in a pretty dramatic way: During the 18th and 19th centuries, more than half the forestland was cleared, but during the 20th century, forests returned. Today about 80 percent of the Northeast is forested,” he said, also noting the high value of the big trees of the Pacific Northwest.

Today, however, North American forests are getting close to the saturation point as older trees plateau; future growth is primarily limited to the pine forests of the East and Southeast. “The future potential is pretty limited,” said Zhu. “If mitigation depends on forests, this has implications for conservation that we have to think about.”