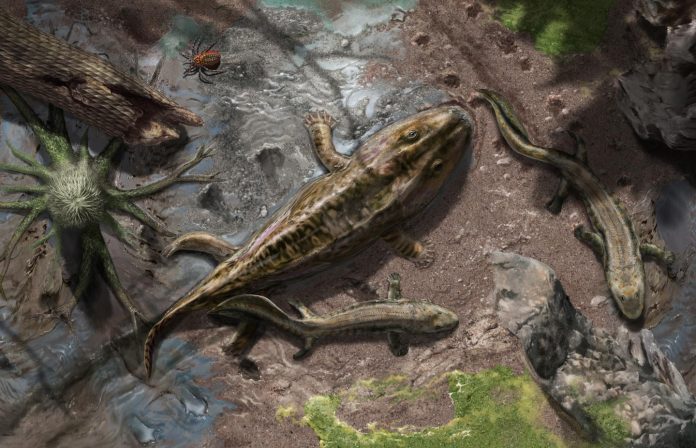 It’s hard to overstate how much of a game-changer it was when vertebrates first rose up from the waters and moved onshore about 390 million years ago. That transition led to the rise of the dinosaurs and all the land animals that exist today.

“Being able to walk around on land essentially set the stage for all biodiversity and established modern terrestrial ecosystems,” said Stephanie Pierce, Thomas D. Cabot Associate Professor of Organismic and Evolutionary Biology and curator of vertebrate paleontology in the Museum of Comparative Zoology. “It represents an incredibly important period of time in evolutionary history.”

Scientists have been trying for more than a century to unravel exactly how this remarkable shift took place, and their understanding of the process is largely based on a few rare, intact fossils with anatomical gaps between them. A new study from Pierce and Blake Dickson, Ph.D. ’20, looks to provide a more thorough view by zeroing in on a single bone: the humerus.

The study, published today, shows how and when the first groups of land explorers became better walkers than swimmers. The analysis spans the fin-to-limb transition and reconstructs the evolution of terrestrial movement in early tetrapods. These are the four-limbed land vertebrates whose descendants include extinct and living amphibians, reptiles, and mammals.

The researchers focused on the humerus, the long bone in the upper arm that runs down from the shoulder and connects with the lower arm at the elbow, to get around the dilemma of gaps between well-preserved fossils. Functionally, the humerus is invaluable for movement because it hosts key muscles that absorb much of the stress from quadrupedal locomotion. Most importantly, the bone is found in all tetrapods and the fishes they evolved from and is pretty common throughout the fossil record. The bone represents a time capsule of sorts, with which to reconstruct the evolution of locomotion since it can be examined across the fin-to-limb transition, the researchers said.

“We went in with the idea that the humerus should be able to tell us about the functional evolution of locomotion as you go from being a fish that’s just swimming around and as you come onto land and start walking,” Dickson said.

The researchers analyzed 40 3D fossil humeri for the study, including new fossils collected by collaborators at the University of Cambridge as part of the TW:eed Project. The team looked at how the bone changed over time and its effect on how these creatures likely moved.

To understand this, the team measured the functional trade-offs associated with adapting to different environments. They found that as these creatures moved from water to land, the humerus changed shape, resulting in new combinations of functional traits that proved more advantageous for life on land than in the water.

That made sense to the researchers. “You can’t be good at everything,” Dickson said. “You have to give up something to go from being a fish to being a tetrapod on land.”

The researchers captured the changes on a topographical map showing where these early tetrapods stood in relation to water-based or land-based living. The scientists said these changes were likely driven by environmental pressures as these creatures adapted to terrestrial life.

The paper describes the transitional tetrapods as having an “L-shaped” humerus that provided some functional benefit for moving on land, but not much. These animals had a long way to go to develop the traits necessary to use their limbs on land to move with ease and skill.

Analysis took about four years to complete. Quantifying how the humerus changed shape and function took thousands of hours on a supercomputer. The researchers then analyzed how those changes impacted functional performance of the limb during locomotion and the trade-offs associated.

The innovative approach represents a new way of viewing and analyzing the fossil record — an effort Pierce said was well worth it.

“This study demonstrates how much information you can get from such a small part of an animal’s skeleton that’s been recorded in the fossil record and how it can help unravel one of the biggest evolutionary transformations that has ever occurred,” Pierce said. “This is really cutting-edge stuff.”