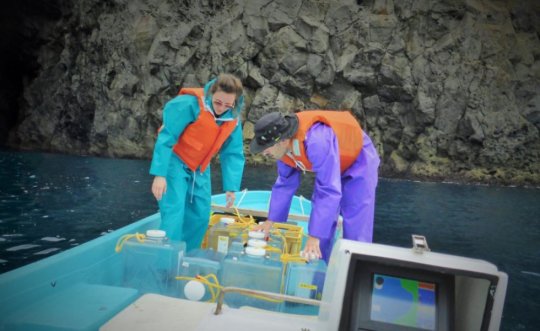 Earth scientists are able to travel far back in time to reconstruct the geological past and paleoclimate to make better predictions about future climate conditions. Scientists at the Netherlands Institute for Sea Research (NIOZ) and Utrecht University succeeded in developing a new indicator (proxy) of ancient CO2-levels, using the organic molecule phytane, a debris product of chlorophyll. This new organic proxy not only provides the most continuous record of CO2-concentrations ever, it also breaks a record in its time span, covering half a billion years. The data show the present idea that rises in CO2-levels that used to take millions of years, are now happening in a century. These findings are published in Science Advances on November 28th.

As CO2 increases today, it’s vital to understand what impact these changes will have. To better predict the future, we must understand long-term changes in CO2 over geologic history. Direct measurements of past CO2 are available, e.g. bubbles in ice cores containing ancient gases. However, ice cores have a limited time span of one million years. To go farther back in time, earth scientists have developed various indirect measurements of CO2 from proxies e.g. from algae, leaves, ancient soils and chemicals stored in ancient sediments to reconstruct past environmental conditions.

Phytane, a new way to travel in time

A new proxy, using a degradation product of chlorophyll, allows geochemists to infer a continuous record of historic CO2-levels in deep time. Scientists at NIOZ have recently developed phytane as a promising new organic proxy that uncovers half a billion years of CO2-levels in the oceans, from the Cambrian until recent times.

Using the new proxy, they were able to make the most continuous record of ancient carbon dioxide levels ever. “We developed and validated a new way to time travel — going farther back in time and to more places,” says NIOZ-scientist Caitlyn Witkowski. “With phytane, we now have the longest CO2-record with one single marine proxy. This new data is invaluable to modelers who can now more accurately make predictions of the future.”

Witkowski and colleagues selected more than 300 samples of marine sediments from deep sea cores and oils from all over the globe, reflecting the majority of geological periods in the last 500 million years.

Past chemical reactions can be ‘stored’ in fossil molecules, and so they may reflect various ancient environmental conditions. Geochemists are able to ‘read’ these conditions, such as seawater temperature, pH, salinity and CO2-levels. Organic matter, such as phytane, reflects the pressure of CO2 in ocean water or the atmosphere (pCO2).

Although all organic matter has the potential to reflect CO2, phytane is special. Phytane is the pigment responsible for our green world. Anything that uses photosynthesis to absorb sunlight, including plants, algae, and some species of bacteria, has chlorophyll from which phytane comes. Plants and algae take in CO2 and produce oxygen. Without these little green miracles, our world just wouldn’t be the same.

Because chlorophyll is found all around the world, phytane is also everywhere and is a major constituent of decayed and fossilized biomass. “Phytane doesn’t chemically change over the course of time, even if it is millions of years old,” Witkowski says.

This also explains why Witkowski didn’t use terrestrial plants as a source for her research, exclusively using phytane from (fossilized) marine sources. The plant world is divided into so-called C3- and C4-plants, each with their own unique ratio of light-to-heavy carbon. Phytoplankton all have very similar ratios compared to their plant counterparts. Witkowski: “By choosing only marine sources, we could limit uncertainty of the phytane source in the dataset.”

“In our data, we see high levels of carbon dioxide, reaching 1000 ppm as opposed to today’s 410 ppm. In this respect, present day levels are not unique, but the speed of these changes have never been seen before. Changes that typically take millions of years are now happening in a century. This additional CO2-data may help us understand the future of our planet.” In future research, phytane can be used to go even further back in time than the Phanerozoic, the earliest found in two billion-year-old samples.