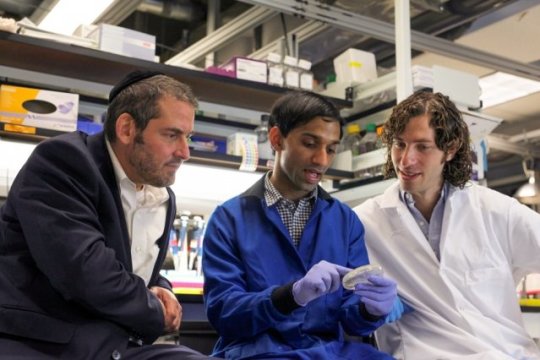 The genome editing system CRISPR has become a hugely important tool in medical research, and could ultimately have a significant impact in fields such as agriculture, bioenergy, and food security.

The targeting system can travel to different points on the genome, guided by a short sequence of RNA, where a DNA-cutting enzyme known as Cas9 then makes the desired edits.

However, despite the gene-editing tool’s considerable success, CRISPR-Cas9 remains limited in the number of locations it can visit on the genome.

That is because CRISPR needs a specific sequence flanking the target location on the genome, known as a protospacer adjacent motif, or PAM, to allow it to recognize the site.

For example, the most widely used Cas9 enzyme, Streptococcus pyogenes Cas9 (SpCas9), requires two G nucleotides as its PAM sequence, significantly restricting the number of locations it can target, to around 9.9 percent of sites on the genome.

As yet, there are only a handful of CRISPR enzymes with minimal PAM requirements, meaning they are able to target a wider range of locations.

Now researchers at the MIT Media Lab, led by Joseph Jacobson, a professor of media arts and sciences and head of the Molecular Machines research group, have discovered a Cas9 enzyme that can target almost half of the locations on the genome, significantly widening its potential use. They report their findings in the Science Advances.

“CRISPR is like a very accurate and efficient postal system, that can reach anywhere you want to go very precisely, but only if the ZIP code ends in a zero,” Jacobson says. “So it is very accurate and specific, but it limits you greatly in the number of locations you can go to.”

To develop a more general CRISPR system, the researchers implemented computational algorithms to conduct a bioinformatics search of bacterial sequences, to determine if there were any similar enzymes with less restrictive PAM requirements.

To carry out the search, the researchers developed a data analysis software tool, which they called SPAMALOT (Search for PAMs by Alignment of Targets).

This revealed a number of interesting possible enzymes, but no clear winner. So the team then built synthetic versions of the CRISPRs in the laboratory, to evaluate their performance.

They found that the most successful enzyme, a Cas9 from Streptococcus canis (ScCas9), was strikingly similar to the Cas9 enzyme already widely used, according to co-lead author Pranam Chatterjee, a graduate student in the Media Lab, who carried out the research alongside fellow graduate student Noah Jakimo.

“The enzyme looks almost identical to the one that was originally discovered … but it is able to target DNA sequences that the commonly used enzyme cannot,” Chatterjee says.

Rather than two G nucleotides as its PAM sequence, the new enzyme needs just one G, opening up far more locations on the genome.

This should allow CRISPR to target many disease-specific mutations that have previously been out of reach of the system.

For example, a typical gene is around 1,000 bases in length, giving researchers a number of different locations to target if their aim is to simply knock out the entire gene, Jacobson says.

However, many diseases, such as sickle cell anemia, are caused by the mutation of a single base, making them much more difficult to target.

“Base editing is not just a matter of hitting that gene anywhere over the 1,000 bases and knocking it out; it is a matter of going in and correcting, in a very precise way, that one base that you want to change,” Jacobson says.

“You need to be able to go to that very exact location, put your piece of CRISPR machinery right next to it, and then with a base editor — another protein that’s attached to the CRISPR — go in and repair or change the base,” he says.

The new CRISPR tool could be particularly helpful in such applications.

“We are excited to get ScCas9 into the hands of the genome editing community and receive their feedback for future development,” Chatterjee says.

The researchers are now hoping to use their technique to find other enzymes that could expand the targeting range of the CRISPR system even further, without reducing its accuracy, according to Jacobson.

“We feel confident of being able to go after every address on the genome,” he says.