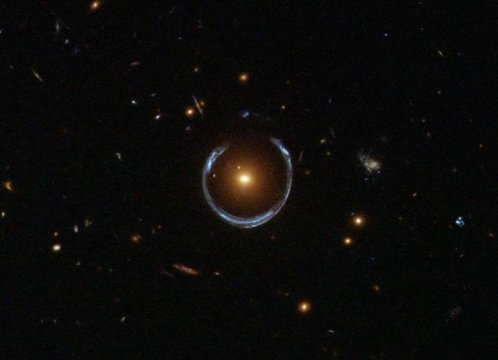 An international team of astronomers have made the most precise test of gravity outside our own solar system.

By combining data taken with NASA’s Hubble Space Telescope and the European Southern Observatory’s Very Large Telescope, the researchers show that gravity in this galaxy behaves as predicted by Albert Einstein’s general theory of relativity, confirming the theory’s validity on galactic scales.

In 1915 Albert Einstein proposed his general theory of relativity (GR) to explain how gravity works. Since then GR has passed a series of high precision tests within the solar system, but there have been no precise tests of GR on large astronomical scales.

It has been known since 1929 that the Universe is expanding, but in 1998 two teams of astronomers showed that the Universe is expanding faster now than it was in the past. This surprising discovery — which won the Nobel Prize in 2011 — cannot be explained unless the Universe is mostly made of an exotic component called dark energy. However, this interpretation relies on GR being the correct theory of gravity on cosmological scales. Testing the long distance properties of gravity is important to validate our cosmological model.

A team of astronomers, led by Dr Thomas Collett of the Institute of Cosmology and Gravitation at the University of Portsmouth, used a nearby galaxy as a gravitational lens to make a precise test of gravity on astronomical length scales.

Dr Collett said: “General Relativity predicts that massive objects deform space-time, this means that when light passes near another galaxy the light’s path is deflected. If two galaxies are aligned along our line of sight this can give rise to a phenomenon, called strong gravitational lensing, where we see multiple images of the background galaxy. If we know the mass of the foreground galaxy, then the amount of separation between the multiple images tells us if General Relativity is the correct theory of gravity on galactic scales.”

A few hundred strong gravitational lenses are known, but most are too distant to precisely measure their mass, so they can’t be used to accurately test GR. However, the galaxy ESO325-G004 is amongst the closest lenses, at 500 million light years from Earth.

Dr Collett continues: “We used data from the Very Large Telescope in Chile to measure how fast the stars were moving in E325 — this let us infer how much mass there must be in E325 to hold these stars in orbit. We then compared this mass to the strong lensing image separations that we observed with the Hubble Space telescope and the result was just what GR predicts with 9 per cent precision. This is the most precise extrasolar test of GR to date, from just one galaxy.”

“The Universe is an amazing place providing such lenses which we can then use as our laboratories,” adds team member Professor Bob Nichol, Director of the Institute of Cosmology and Gravitation. “It is so satisfying to use the best telescopes in the world to challenge Einstein, only to find out how right he was.”

The research is published today in the journal Science. The work was funded by the University of Portsmouth and the UK Science and Technologies Funding Council.