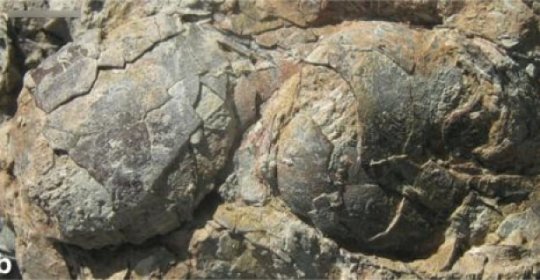 An international team of scientists, including researchers from the University of Southampton, has shown that fossilised eggshells unearthed in western Romania represent the earliest known nest site shared by multiple animals.

The shells — some complete and others broken into thousands of pieces — are densely packed and encased in mudstone which formed part of the remains of a bird breeding colony, probably comprising hundreds of seperate nests.

Now in the collections of the Transylvanian Museum Society in Cluj Napoca, Romania, the samples date from the late-Cretaceous period (approx. 70 million years ago) and were discovered near the city of Sebeş in Transylvania by local palaeontologist Mátyás Vremir about nine years ago.

Led by Centro Regional Universitario Bariloche in Argentina, the scientists examined sophisticated electron microscope images of the unique, fossilised material from the site. They established it contains four different types of egg shell, indicating that four types of animals all shared the same nesting site; extinct birds within a group known as enantiornithes, birds of undetermined classification, gecko-like lizards and smaller predecessors of today’s crocodiles.

Christian Laurent, Tizard Scholar and member of the Aerodynamics and Flight Mechanics Group at the University of Southampton, comments: “We know very little about the parental behaviour of Mesozic birds, We know they had nests, laid eggs and hatched young which were relatively mature and able to move around after hatching — but evidence is scant beyond this. This research suggests they were tolerant of creating their nests, not only alongside other birds, but also reptiles.”

The team, which also includes researchers from the University of Jinan (China), the Transylvanian Museum Society (Romania), the Royal British Columbia Museum (Canada), the University of Debrecen (Hungary), and Pavol Jozef Safarik University (Slovak Republic), has published its findings in the journal Nature Scientific Reports.

Their paper speculates that an area of plain created by seasonal flooding offered the enantiornithes safety from predators. It’s also believed that their nest environments afforded shelter to smaller reptiles which benefitted from the security of the birds guarding their own nests. The researchers suggest that the lizard and crocodile type animals were not perceived as a threat to the bird eggs and nestlings — possibly because they were much smaller than the adult birds and so not a predatory threat to them or their hatchlings. To date, this is the oldest example of this kind of ecological strategy.

Christian Laurent adds: “Evidence supporting our theory can still be seen today in Argentina, where lizards (Salvator merianae) co-habit and lay eggs inside the nests of the caiman crocodile — safe in the knowledge that the female doesn’t feed during the incubation of her eggs and poses no threat to the hatchling lizards.”