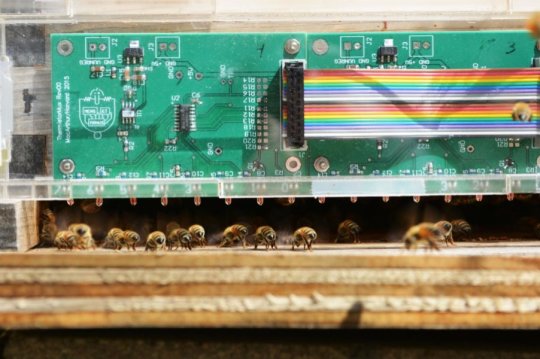 If you’ve ever walked past a bee’s nest on a hot summer day, you’ve probably been too focused avoiding getting stung, rather than stopping to wonder how all those bees stay cool. Don’t worry, Harvard scientists have braved the stingers to ask and answer that question for you.

Honey bees live in large, congested nest cavities, often in tree hollows with narrow openings. When it gets hot inside the nest, a group of bees crawl to the entrance and use their wings as fans to draw hot air out and allow cooler air to move in. The question is, how do bees self-organize into these living ventilating units?

Researchers at the Harvard John A. Paulson School of Engineering and Applied Sciences (SEAS) and the Department of Organismic and Evolutionary Biology (OEB) have developed a framework that explains how bees use environmental signals to collectively cluster and continuously ventilate the hive.

“Over millennia, social insects such as bees have evolved to harness and exploit flows and forces and collectively solve physiological problems such as mechanical stabilization, thermoregulation and ventilation on scales much larger than the individual,” said L Mahadevan, de Valpine Professor of Applied Mathematics, Physics, and Organismic and Evolutionary Biology, and senior author of the study. “A combination of measurements and computational models quantify and explain how fanning bees create an emergent large-scale flow pattern to ventilate their nests.”

“We have demonstrated that bees don’t need a sophisticated recruitment or communications scheme to keep their nests cool,” said Jacob Peters, a postdoctoral fellow in SEAS and OEB, and first author of the paper. “Instead the fanning response of individual bees to temperature variations, and the physics of fluid flow leads to their collective spatial organization, which happens to lead to an efficient cooling solution.”

The paper is published in the Journal of the Royal Society Interface.

Experiments began in the dog days of the summer of 2017. Over the course of several weeks, Peters, Mahadevan and former postdoctoral fellow at SEAS Orit Peleg monitored a group of artificial beehives in Harvard University’s Concord Field Station.

The research team measured temperature, air flow into and out of the nest, and the position and density of bees fanning at the nest entrance. They observed that rather than spreading out across the entirety of the nest entrance, the bees clustered at the hottest areas and kept those areas, which had the highest air outflow, separate from the cooler areas with the highest air inflow. Importantly, they found that different bees had different temperature thresholds above which they would begin fanning, so that collectively they were better at responding to temperature variations.

“Our study demonstrates how harnessing the dynamics of the physical environment allows for large-scale organization of a physiological process,” said Peleg, who co-authored the paper and is now an Assistant Professor at the University of Colorado Boulder.

“Although this is a physics-focused story, biological variation with roots in genetics and evolution likely plays a big role in order for this system to work,” said Peters. “Our theory suggests that not only does individual variability in temperature threshold lead to a more stable hive temperature but also this diversity is critical to the stability of the patterning of fanning behavior which is required for efficient ventilation.”

“In everything from large HVAC systems to the fans that cool our computers, bioinspired, self-organizing systems may be able to adapt and respond to specific demands better than current systems,” said Peters.

“More broadly, our study highlights, yet again, the need to consider both biological organisms and their physical environments to understand the richness of collective eco-physiology, a hallmark of life itself,” said Mahadevan.

This work was supported by the National Science Foundation.