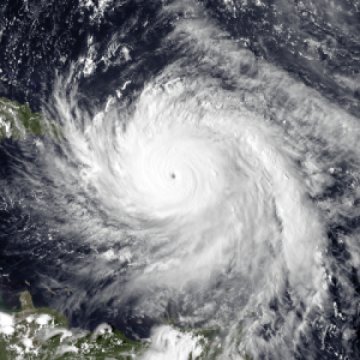 Hurricane Maria dropped more rain on Puerto Rico than any storm to hit the island since 1956, a feat due mostly to the effects of human-caused climate warming, new research finds.

A new study analyzing Puerto Rico’s hurricane history finds 2017’s Maria had the highest average rainfall of the 129 storms to have struck the island in the past 60 years. A storm of Maria’s magnitude is nearly five times more likely to form now than during the 1950s, an increase due largely to the effects of human-induced warming, according to the study’s authors.

“What we found was that Maria’s magnitude of peak precipitation is much more likely in the climate of 2017 when it happened versus the beginning of the record in 1950,” said David Keellings, a geographer at the University of Alabama in Tuscaloosa and lead author of the new study in AGU’s journal Geophysical Research Letters.

Previous studies have attributed Hurricane Harvey’s record rainfall to climate change, but no one had yet looked in depth at rainfall from Maria, which struck Puerto Rico less than a month after Harvey devastated Houston and the Gulf Coast. Extreme rainfall during both storms caused unprecedented flooding that placed them among the top three costliest hurricanes on record (the other being Hurricane Katrina in 2005).

The new study adds to the growing body of evidence that human-caused warming is making extreme weather events like these more common, according to the authors.

“Some things that are changing over the long-term are associated with climate change — like the atmosphere getting warmer, sea surface temperatures increasing, and more moisture being available in the atmosphere — together they make something like Maria more likely in terms of its magnitude of precipitation,” Keellings said.

Constructing a history of rain

José Javier Hernández Ayala, a climate researcher at Sonoma State University in California and co- author of the new study, is originally from Puerto Rico and his family was directly impacted by Hurricane Maria. After the storm, Hernández Ayala decided to team up with Keellings to see how unusual Maria was compared to previous storms that have struck the island.

The researchers analyzed rainfall from the 129 hurricanes that have struck Puerto Rico since 1956, the earliest year with records they could rely on. They found Hurricane Maria produced the largest maximum daily rainfall of those 129 storms: a whopping 1,029 millimeters (41 inches) of rain. That places Maria among the top 10 wettest hurricanes to ever have hit United States territory.

Keellings and Hernández Ayala also wanted to know whether Maria’s extreme rain was a result of natural climate variability or longer-term trends like human-induced warming. To do so, they analyzed the likelihood of an event like Maria happening in the 1950s versus today.

They found an extreme event like Maria was 4.85 times more likely to happen in the climate of 2017 than in 1956, and that change in probability can’t be explained by natural climate cycles.

At the beginning of the observational record in the 1950s, a storm like Maria was likely to drop that much rain once every 300 years. But in 2017, that likelihood dropped to about once every 100 years, according to the study.

“Due to anthropogenic climate change it is now much more likely that we get these hurricanes that drop huge amounts of precipitation,” Keellings said.

The findings show human influence on hurricane precipitation has already started to become evident, according to Michael Wehner, a climate scientist at Lawrence Berkeley National Laboratory in Berkeley, California, who was not connected to the new study. Because so much of Maria’s damage was due to flooding from the extreme amount of rain, it is safe to say that part of those damages were exacerbated by climate change, Wehner said.

“Extreme precipitation during tropical cyclones has been increased by climate change,” he said. “Not all storms have a large amount of inland flooding, of freshwater flooding. But of those that do, the floods are increased to some extent by climate change.”