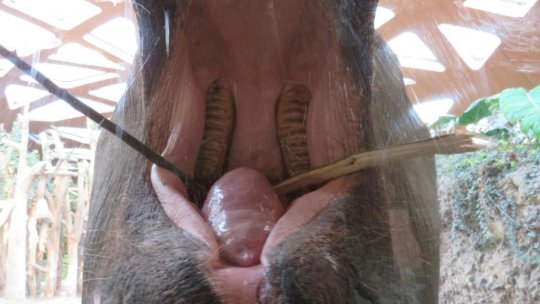 The teeth of most mammals, including humans, are only replaced once in a lifetime, when the milk teeth give way to the permanent teeth. This one change is enough to adapt to the increasing size of the jaw. But elephants increase greatly in size and weight over the course of their lives — from a starting weight of 100 kilograms to several tons in adulthood. One single change of teeth would not be enough for the enormous growth of the jaw.

That’s why the teeth of elephants are replaced a total of five times over their lifespan. On each side of the jaw they have only one single tooth in use at a time which is slowly pushed forwards by a new bigger tooth out of the mouth, breaking off in pieces. If you look inside an elephant’s mouth you will see either only one single tooth or pieces of the old tooth behind which part of the new tooth is pushing through, a process that is called molar progression.

As a result of this process, the elephants’ chewing surface gets bigger when two teeth are present on one side at the same time, and then smaller again when there is only one tooth on each side. For that reason there are times when it is easier for the animals to eat more or chew the same amount more finely, and hence increase the intake of digestible food.

Researchers at the Vetsuisse Faculty of the University of Zurich have now observed weight fluctuations in elephants living in zoos, which can be explained by these changes of teeth. “We actually wanted to find out whether zoo elephants that have offspring are lighter than those who have not reproduced,” says Marcus Clauss of the Clinic for Zoo Animals, Exotic Pets and Wildlife. To this end, PhD candidate Christian Schiffmann visited nearly every zoo in Europe and recorded the weight of the elephants.

The researchers then noticed a pattern. The animals continually gained weight from childhood to adulthood, and then their bodyweight fluctuated by 300 kilograms in long cycles of around a hundred months. “At first we thought it might have something to do with the seasons or with reproduction,” explains Christian Schiffmann. “But the cycle is a lot longer than one year, and we found the same pattern in groups that were not reproducing. The only other plausible explanation was the unusual tooth change process in elephants.”

For elephants living in the wild, it is unlikely that this phenomenon would be observed: As elephants reproduce all year round but do experience seasonal fluctuations in the amount of food available, animals of various ages and tooth stages have access to differing quality and quantity of food. The weight of these elephants is therefore influenced by other factors alongside the change of teeth. It is only in zoos, where food availability is comparatively stable, that the pattern can be clearly observed. For Clauss, this study is therefore a superb example of how research into zoo animals can provide new biological findings that would not be possible by observing animals in the wild.