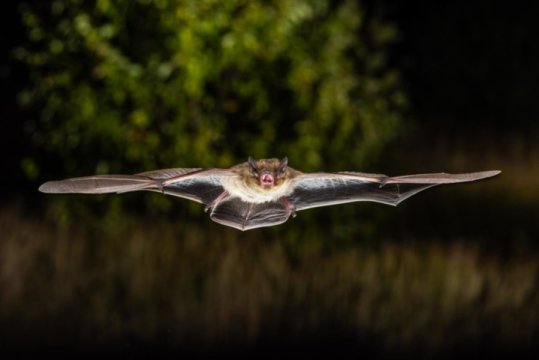 Aerial migration is the fastest, yet most energetically demanding way of seasonal movements between habitats. A new study led by scientists at the Leibniz Institute for Zoo and Wildlife Research (Leibniz-IZW) investigated the energy requirements and travel speeds of migrating Nathusius’ bats (Pipistrellus nathusii). Using a wind tunnel experiment to determine the exact energy demands of different flying speeds and a field study to record actual travel speeds of migrating bats, the scientists demonstrated that bats travel at the speed where their range reaches a maximum, enabling them to cover long distances with a minimum amount of energy. How the researchers tracked down this cruise control is published in the Journal of Experimental Biology.

For many taxa, and bats in particular, scientists still lack a clear understanding of the energy requirements for migration. A team of scientists lead by Sara Troxell and Christian Voigt from the Leibniz-IZW designed an ambitious experimental study to make substantial progress on this question. The first part of the study was a wind tunnel experiment combined with measurements in a respirometry chamber. The chamber allowed the scientists to precisely track the CO2 enrichment in the air from the breath of the bats, from which they calculated the metabolic rate during flight. By repeating these measurements directly before and after one-minute flights at various speeds in the wind tunnel, the scientists recorded flight metabolic rate in relation to air speed and then calculated the flight speed with the best energy to distance ratio. The second part of the study was conducted at a migratory corridor along the Baltic Sea coast in Latvia. Using the echolocation calls of migrating Nathusius’ bats, the scientists established the flight trajectories of these bats which allowed them to measure the actual speed of migration. “Our study confirms that the observed flight speeds are consistent with the expectation that migratory bats practice optimal flight speeds for covering the largest distance with the least amount of energy,” Troxell and Voigt concluded. This speed is around 7.5 meters per second, equivalent to 27 kilometres (16 miles) per hour.

The field study also facilitated the comparison of the flight speed of migrating bats with the speed of bats foraging for insects. Foraging bats fly at significantly lower speeds than the most efficient speed determined in the wind tunnel experiments. “When foraging in a dune forest, bats performed sharp turns in order to catch insects,” Troxell explains. “These tight turns require slower flight speeds and the overall speed might be reduced in anticipation of such turns.” Previous studies in less confined habitats revealed average foraging speeds that were much closer to the calculated ideal speed.

Data of migratory flight speed and flight energy expenditure make it possible to estimate energetic requirements of trans-continental migration in small-sized bats. “However, it is important to realise that our insights into the migratory behaviour of bats are still in their infancy,” Voigt explains. Extrapolation of the energy needed by a Nathusius’ bat travelling a distance of 2,000 kilometres from northeastern Europe to hibernacula sites in western or southern France result in an estimated total energy demand of almost 300 kilojoules. A journey of this length needs at least 12 days to complete when flying in a straight line. Currently, the exact routes, flying hours and distances flown per night are still unknown, so need to be investigated in more detail.