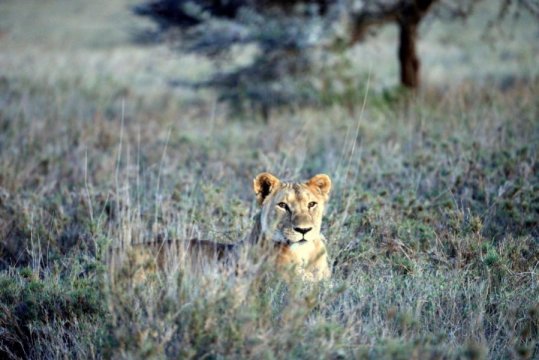 Are Laikipia’s recovering lions turning to endangered Grevy’s zebras (Equus grevyi) for their next meal?

That’s what a team of researchers led by WCS and WWF set out to discover — whether the comeback of a top predator — in this case lions in Laikipa County, Kenya — were recovering at the expense of Grevy’s zebras, which number only around 2,680 individuals with half of those living in Likipia.

In recent years, lion numbers have slowly recovered in this region as livestock ranching — which commonly practiced shooting or poisoning lions — has given way to wildlife tourism. Lions (Panthera leo) are classified as Threatened by IUCN.

Publishing their results in the journal PLOS ONE, the team used satellite telemetry to track the movements of both lions and zebras.

The team found that lions preyed on both Grevy’s and plains zebras (Equus quagga) far less than expected. Their data showed that the population of Grevy’s zebra populations may in fact be stabilizing with recruitment into the population tripling since 2004.

The researchers did conclude that competitive displacement by livestock and interference competition for grass from plains zebras, which are 22 times more abundant than Grevy’s, are most likely the predominant threat to Grevy’s zebras’ recovery.