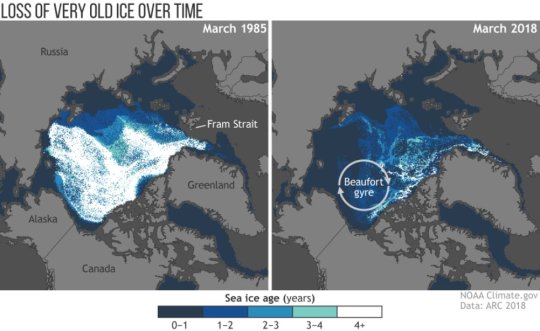 NOAA’s annual report card on the Arctic, released today at the American Geophysical Union fall meeting in Washington, D.C., measures the changing climate of the polar region including warmer air and ocean temperatures and declines in sea-ice that are driving shifts in animal habitats.

Now in its 13th year, the 2018 Arctic Report Card is a peer-reviewed report that provides an annual status update on the region and compares these observations to the long-term record. It was compiled from the research of 81 scientists working for governments and academia in 12 nations. This information can be used to inform decisions by local, state and federal leaders as Arctic residents confront the challenges and opportunities posed by a rapidly changing climate and ecosystem.

“The environmental changes in the Arctic underscore why NOAA continues to invest in Arctic research and activities, which improve the nation’s economic competitiveness, national security, and the sustainable management of natural resources,” said retired Navy Rear Adm. Timothy Gallaudet, Ph.D., acting under secretary of commerce for oceans and atmosphere at NOAA, who led the news conference to release the report card. “This report will also help guide NOAA’s priorities in better understanding the role of the Arctic in climate change and extreme weather; sustaining and growing fisheries; and supporting adaptation and economic opportunities in the region.”

In addition to annual updates on ocean temperature, snow cover, tundra greenness and melting on the Greenland Ice Sheet, the report card also includes reports on multi-year environmental changes, including a long-term population decline of the region’s iconic wildlife species, the caribou. Other multi-year essays focused on the expansion northward of toxic harmful algae and significant concentrations of microplastic pollution that are transported by ocean currents into the Arctic Ocean from other parts of the global ocean.

This report card is just one of many aspects of NOAA’s role in the Arctic region. NOAA, alongside many partners, is monitoring Arctic conditions, pioneering innovative technologies, and creatively collecting data and other scientific information.