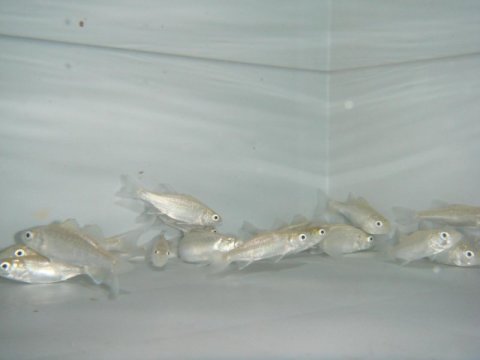 When carbon dioxide is absorbed by seawater carbonic acid is formed, making the water more acidic. Since the Industrial Revolution, oceanic CO2 has risen by 43% and is predicted to be two and a half times current levels by the end of this century.

Fish use their sense of smell (olfaction) to find food, safe habitats, avoid predators, recognize each other and find suitable spawning grounds. A reduction in their ability to smell therefore can compromise these essential functions for their survival.

The new study provides evidence that economically important species will be affected by elevated CO2, leaving fish vulnerable because it affects their ability to detect odours.

University of Exeter researcher Dr Cosima Porteus, who led the study, said: “Our study is the first to examine the impact of rising carbon dioxide in the ocean on the olfactory system of fish. First we compared the behaviour of juvenile sea bass at CO2 levels typical of today’s ocean conditions, and those predicted for the end of the century. Sea bass in acidic waters swam less and were less likely to respond when they encountered the smell of a predator. These fish were also more likely to “freeze” indicating anxiety.”

Experts at the University of Exeter, in collaboration with scientists from the Centre of Marine Sciences (CCMar, Faro, Portugal) and the Centre for Environment, Fisheries and Aquaculture Science (Cefas), also tested the ability of the sea bass’ nose to detect different smells. They did this by recording the activity in the nervous system while their nose was exposed to water with different levels of CO2 and acidity.

Dr Porteus added: “The sense of smell of sea bass was reduced by up to half in sea water that was acidified with a level of CO2 predicted for the end of the century. Their ability to detect and respond to some odours associated with food and threatening situations was more strongly affected than for other odours. We think this is explained by acidified water affecting how odorant molecules bind to olfactory receptors in the fish’s nose, reducing how well they can distinguish these important stimuli.

Scientists also studied how the elevated CO2 and acidity in the water affected the genes being expressed in the nose and brain of sea bass and found evidence for altered expression of many of those involved in sensing smells and processing of this information. Although only sea bass were used in the study, the processes involved in the sense of smell are common to many aquatic species and therefore the findings should apply very broadly.

Dr Porteus said: “I wanted to examine if fish had any ability to compensate for this reduced sense of smell, but found that instead of increasing the expression of genes for smell receptors in their nose they did the opposite, exacerbating the problem.”

Prof Rod Wilson from the University of Exeter also commented on the plight for fish in a higher CO2 future world: “Our intriguing results show that CO2 impacts the nose of the fish directly. This will be in addition to the impact of CO2 on their central nervous system function suggested by others previously, which proposed an impaired processing of information in the brain itself. It is not yet known how rapidly fish will be able to overcome these problems as CO2 rises in the future. However, having to cope with two different problems caused by CO2, rather than just one, may reduce their ability to adapt or how long this will take.”

Near-future carbon dioxide levels impair the olfactory system of a marine fish is published in the journal Nature Climate Change.