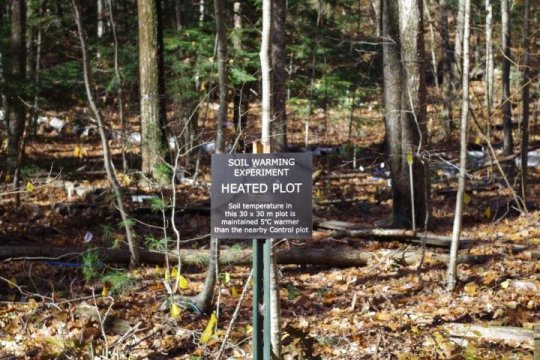 Characterizing the diversity of microbial cells in a handful of soil is so complex it was considered impossible. To date, only a small fraction of the microbes residing in, on and around soils have been identified as part of efforts to understand their contributions to the global carbon cycle, and to other nutrient cycles. Soils are also home to countless viruses that can infect microbes, impacting their ability to regulate these global cycles.

Reported November 19, 2018, in Nature Communications, giant virus genomes have been discovered for the first time in a forest soil ecosystem by researchers from the U.S. Department of Energy (DOE) Joint Genome Institute (JGI), a DOE Office of Science User Facility, and the University of Massachusetts-Amherst (UMass Amherst). As the name implies, giant viruses are characterized by disproportionately large genomes and virions that house the viruses’ genetic material. They have been frequently found within protists and algae, and thus they are believed to have a significant impact on their hosts’ population dynamics and the planet’s biogeochemical cycles.

The 16 novel giant viruses discovered in this study increased the total giant virus phylogenetic diversity by more than 20 percent, and belong to diverse lineages. Half of the novel viruses, for example, fall within the Klosneuvirinae, making it the largest subfamily within Mimiviridae. Schulz and Woyke previously reported finding a novel group of giant viruses they dubbed Klosneuviruses in wastewater metagenomes.

“These giant viruses have probably been overlooked in soil ecosystems, but if you look at major capsid proteins, which are barcodes or snippets of them, they’re all over the place,” said JGI Microbial Program head and study senior author Tanja Woyke.

Viruses in the Harvard Forest

The giant virus genomes were discovered by Frederik Schulz, a JGI research scientist, while helping Lauren Alteio, a UMass Amherst graduate student in Jeff Blanchard’s lab, analyze her metagenomic data. “The large number of distinct giant virus genomes found at this sampling site is unparalleled compared to other metagenomic data sets I have seen,” said Schulz. The data was generated from soil samples Alteio collected as part of Blanchard’s project with the JGI’s Community Science Program.

Blanchard is generating reference genomes from soils collected in heated and non-heated plots in the Harvard Forest, data that will ultimately assist in the understanding of microbial greenhouse gas emission and capture. Alteio spent a year at the JGI working on this project in the Woyke lab through the DOE Office of Science Graduate Student Research (SCGSR) Program.

For nearly 30 years, the Harvard Forest in Massachusetts has been home to the world’s longest running soil-warming experiment. Funded by the National Science Foundation’s Long-Term Ecological Research (LTER) Program, a portion of the 4,000 acres has heating cables buried a few inches underground regulating the temperature to constantly be five degrees warmer than nearby control areas.

“This is the first time giant viruses have been discovered in a forest ecosystem,” said Blanchard, “and the amazing diversity in just a thimble of soil suggests that we have just begun to understand their biodiversity and role in soil ecosystems.”

“Based on genome size, several of the novel viruses were among the largest viruses discovered to date,” Schulz concluded. “One of them, with a 2.4-megabase genome, we named “Hyperionvirus” in analogy to the world’s tallest known living tree.”

With a myriad of microbial cells in a single gram of soil, JGI researchers aimed to reduce the complexity by flow-sorting microbes into several of small pools of only 100 cells each before sequencing these pools separately. When the metagenomic data from this approach was analyzed, 15 novel giant virus genomes were uncovered. In contrast, only a single giant virus genome was recovered using the standard, whole community shotgun metagenome approach on bulk forest soil samples even though these bulk soil samples were sequenced much more deeply.

“This nonstandard approach was taken deliberately to break up the diversity into smaller chunks. Had we only done it the regular way, we would have missed these giant viruses altogether,” said JGI scientist Rex Malmstrom, also a study co-author.

“The wealth of giant viruses in soil is remarkable and underlines the ubiquitous nature of these enigmatic entities and that these viruses are still mostly underexplored,” said Schulz.

Woyke agreed that finding these novel giant virus genomes is just the beginning. “Soils have been an overlooked ecosystem for giant virus diversity, with studies mostly focused on aquatic environments. The unbinned metagenome soil data suggests that the extent of giant virus diversity in Harvard forest soil is much higher than the 16 genomes recovered in this study, but accessing the genomes with traditional approaches is challenging. This discovery suggests soils should be considered a target for co-cultivation efforts of giant viruses.”