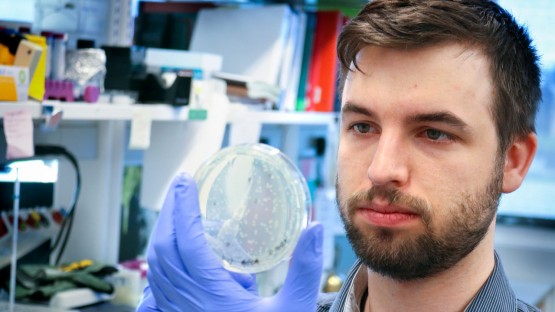 The bacteria Legionella pneumophila has been the favorite snack of certain water-borne amoeba for millions of years, during which time the bacteria has evolved defenses against those amoeba.

Over that same time, Legionella – the bacteria that causes Legionnaires’ disease – has developed defenses against humans’ white blood cells, known as the “defenders of the lungs.”

“Immune cells in human lungs happen to act a lot like amoeba. They consume the bacteria, but they aren’t prepared to fight it,” said Alan Sulpizio, a fifth-year graduate student in the field of biochemistry, molecular and cell biology.

That lack of a good defense in our lungs’ immune cells has made treating Legionnaires’ disease an uphill battle. However, a unique protein that Sulpizio helped discover may offer a breakthrough for developing better treatments for Legionnaires’ – as well as other infectious diseases.

In recognition of this important finding, Sulpizio has been named the 2020 recipient of the Harry and Samuel Mann Outstanding Graduate Student Award. The honor, now in its eighth year, provides $20,000 of funding to a graduate student in molecular biology and genetics.

“Alan is one of the most enthusiastic, creative and hardworking students I have ever met,” said Yuxin Mao, associate professor in the Department of Molecular Biology and Genetics. “I have no doubt about his tremendous potential to be a star in his future academic career.”

In Mao’s lab, Sulpizio researches how the Legionella bacteria’s invasive proteins interact with cells in humans’ lungs. Understanding these behaviors will help others develop better treatments for Legionnaires’ disease, a severe form of pneumonia that is fatal in 10% of cases.

When a white blood cell tries to eat Legionella, the bacteria fights back by injecting more than 300 different types of proteins into the cell. This arsenal of invading proteins works to disrupt the white blood cell’s usual processes, including its use of a regulatory protein called ubiquitin. Normally, ubiquitin regulates many important processes needed for life, including the movement of other proteins and tagging those that should be destroyed

Mao’s lab discovered that Legionella takes control of ubiquitin, thus preventing it from functioning normally and using it to protect Legionella. The bacterium does this by deploying a protein called SdeA, which creates a connector link between ubiquitin and proteins within the white blood cells to control them.

However, Legionella purposely limits its utilization of this weaponized protein. If the bacteria overuses SdeA, it will kill the white blood cells too soon – before it can use their molecular machinery to replicate itself and spread to other cells.

When Sulpizio joined Mao’s lab, he was curious about what the other 300 Legionella proteins were doing, and he wanted to find out what mechanisms were keeping SdeA in check. He helped discover three crucial proteins: SidJ, which stops Legionella from creating new SdeA-ubiquitin links; and DupA and DupB, which act like scissors to cut existing links.

“This gives some ubiquitin control back to the host cell, so it’s healthy enough to live,” Sulpizio said.

Of those three proteins, he said that the SidJ discovery is especially significant. SidJ looks like a group of proteins known as kinases, which serve as catalysts in regulating the biological activity of other proteins. Yet, Sulpizio, Mao and their collaborators noticed that SidJ uses an unexpected tool to prevent the SdeA-ubiquitin links: glutamate, one of the basic building blocks of proteins.

“This is a super bizarre finding. A kinase-like protein attaching glutamate has never been seen before in all of biology,” Sulpizio said. “Kinases form a very important group of proteins that are the target of many pharmaceuticals, and there is still a lot to learn about them. We hope this discovery will help other researchers design better therapeutics.”

The finding has important implications for future treatment of Legionnaires’ disease, but also for other medical conditions associated with infectious diseases. For example, the researchers found a poorly understood protein similar to SidJ in bacteria associated with miscarriages.

“We are fortunate to assist the fascinating research of Alan Sulpizio and his colleagues, particularly during these trying times,” said Thomas Mann ’64,
Samuel Mann’s son. “Hopefully young scientists will help create a better world for all humanity.”

The Harry and Samuel Mann Outstanding Graduate Student Award was established in 2012 by Thomas Mann and Diann Mann ’66, and Cornell parents Jeanne (Mann) Newman and Gary Newman. The annual award honors Harry and Samuel Mann – the children of Russian immigrants and some of the earliest commercial suppliers of biochemicals for life science research – by recognizing the next generation of biochemical, molecular and cell biologists.

Krisy Gashler is a freelance writer for the College of Agriculture and Life Sciences.