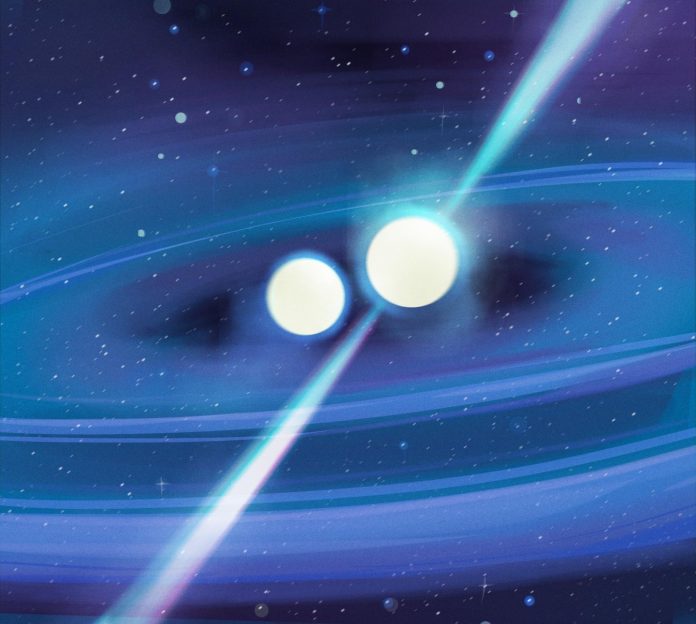 An important breakthrough in how we can understand dead star collisions and the expansion of the Universe has been made by an international team, led by the University of East Anglia.

They have discovered an unusual pulsar – one of deep space’s magnetized spinning neutron-star ‘lighthouses’ that emits highly focused radio waves from its magnetic poles.

The newly discovered pulsar (known as PSR J1913+1102) is part of a binary system – which means that it is locked in a fiercely tight orbit with another neutron star.

Neutron stars are the dead stellar remnants of a supernova. They are made up of the most dense matter known – packing hundreds of thousands of times the Earth’s mass into a sphere the size of a city.

In around half a billion years the two neutron stars will collide, releasing astonishing amounts of energy in the form of gravitational waves and light.

But the newly discovered pulsar is unusual because the masses of its two neutron stars are quite different – with one far larger than the other.

This asymmetric system gives scientists confidence that double neutron star mergers will provide vital clues about unsolved mysteries in astrophysics – including a more accurate determination of the expansion rate of the Universe, known as the Hubble constant.

The discovery, published today in the journal Nature, was made using the Arecibo radio telescope in Puerto Rico.

“The event caused gravitational-wave ripples through the fabric of space time, as predicted by Albert Einstein over a century ago.”

Known as GW170817, this spectacular event was also seen with traditional telescopes at observatories around the world, which identified its location in a distant galaxy, 130 million light years from our own Milky Way.

Dr Ferdman said: “It confirmed that the phenomenon of short gamma-ray bursts was due to the merger of two neutron stars. And these are now thought to be the factories that produce most of the heaviest elements in the Universe, such as gold.”

The power released during the fraction of a second when two neutron stars merge is enormous – estimated to be tens of times larger than all stars in the Universe combined.

So the GW170817 event was not surprising. But the enormous amount of matter ejected from the merger and its brightness was an unexpected mystery.

Dr Ferdman said: “Most theories about this event assumed that neutron stars locked in binary systems are very similar in mass.

“Our new discovery changes these assumptions. We have uncovered a binary system containing two neutron stars with very different masses.

“These stars will collide and merge in around 470 million years, which seems like a long time, but it is only a small fraction of the age of the Universe.

“Because one neutron star is significantly larger, its gravitational influence will distort the shape of its companion star – stripping away large amounts of matter just before they actually merge, and potentially disrupting it altogether.

“This ‘tidal disruption’ ejects a larger amount of hot material than expected for equal-mass binary systems, resulting in a more powerful emission.

“Although GW170817 can be explained by other theories, we can confirm that a parent system of neutron stars with significantly different masses, similar to the PSR J1913+1102 system, is a very plausible explanation.

“Perhaps more importantly, the discovery highlights that there are many more of these systems out there – making up more than one in 10 merging double neutron star binaries.”

Co-author Dr Paulo Freire from the Max Planck Institute for Radio Astronomy in Bonn, Germany, said: “Such a disruption would allow astrophysicists to gain important new clues about the exotic matter that makes up the interiors of these extreme, dense objects.

“This matter is still a major mystery – it’s so dense that scientists still don’t know what it is actually made of. These densities are far beyond what we can reproduce in Earth-based laboratories.”

The disruption of the lighter neutron star would also enhance the brightness of the material ejected by the merger. This means that along with gravitational-wave detectors such as the US-based LIGO and the Europe-based Virgo detector, scientists will also be able to observe them with conventional telescopes.

Dr Ferdman said: “Excitingly, this may also allow for a completely independent measurement of the Hubble constant – the rate at which the Universe is expanding. The two main methods for doing this are currently at odds with each other, so this is a crucial way to break the deadlock and understand in more detail how the Universe evolved.”

‘Asymmetric mass ratios for bright double neutron-star mergers’ is published in the journal Nature on July 8, 2020.