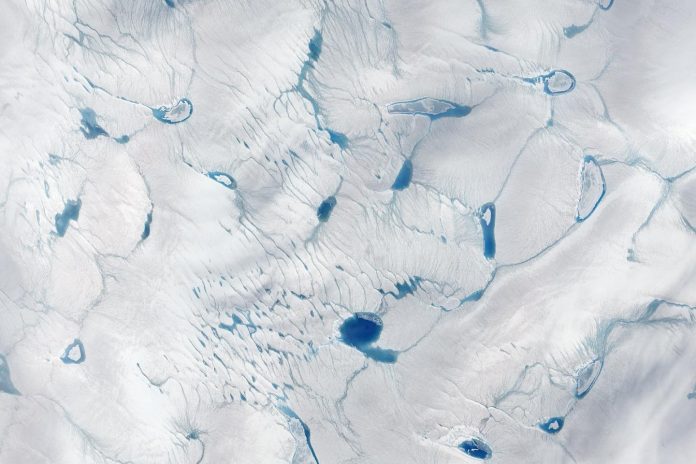 The Greenland Ice Sheet holds enough water to raise sea levels nearly 24 feet, and scientists have confirmed that this titanic volume of ice melted at least once in the past million years. Climate change is now causing Greenland to shed ice rapidly, and even a few feet of sea level rise will have grim implications for coastal cities and low-lying islands.

A new project aimed at drilling through the ice to the underlying bedrock promises to reveal the ice sheet’s past in unprecedented detail and enable more accurate predictions of how it may add to rising seas in the 21st century.

Scientists from Columbia University, the University at Buffalo, the University of Massachusetts at Amherst, and Pennsylvania State University were awarded a $3 million research grant and $4 million in field operations support from the National Science Foundation for the project, called GreenDrill. This ambitious five-year endeavor aims to uncover the exact extent, timing, and frequency of periods when the Greenland Ice Sheet was much smaller or completely gone.

“With this project, we’re entering an entire zone of the Earth that nobody has systematically studied,” said Joerg Schaefer, a geochemist at Columbia’s Lamont-Doherty Earth Observatory and a co-leader of the project. “We’ll recover samples from basal ice and sub-ice bedrock comparable to the moon rocks in their rareness and preciousness. They will tell us directly about the past, and therefore the modern and future stability of the Greenland Ice Sheet.”

The project has the potential to reinvigorate United States ice-drilling efforts in the Arctic. The last major effort, the Greenland Ice Sheet Project 2, ceased in the mid-1990s. GreenDrill is arguably the most novel drilling experiment led by U.S. researchers since then.

The scientists will use the new ice-sheet data to test the hypothesis that northern Greenland is more sensitive to Arctic warming than the southern part. The data will also inform the project’s substantial climate and ice sheet modeling component, which aims to develop the next generation of robust and better-calibrated model predictions of Greenland’s future melt scenarios.

“The Greenland Ice Sheet might be the canary in the coal mine,” said Gisela Winckler, a Lamont geochemist and GreenDrill co-principal investigator. “This project will hopefully help us figure out potential contributions from Greenland to sea level rise, in the past, and in the future.”

Recovering a series of cores at four locations in northern Greenland is the primary goal of these expeditions. Each site consists of a transect that starts at the ice-free edge of the island and moves inland, where the team will bore through hundreds of meters of ice to reach the bedrock below.

From these cores, the scientists seek pieces of Greenland’s surface rock for the information they can yield about the ice sheet’s past. When bedrock is free of ice, detectable isotopes produced by the interaction of cosmic rays with the nucleus of certain atoms accumulate in the upper layers of the rock after decades of exposure to the open sky. Analyses of these isotopes will show when and how the ice sheet receded.

Rob DeConto, a climate scientist at the University of Massachusetts at Amherst, will integrate the findings into models that simulate the ice sheets’ physical processes and future behavior.

“It’s absolutely critical that we know how much ice Greenland lost in the past–and this is still very uncertain,” said DeConto. “GreenDrill will help reduce this uncertainty. This knowledge of the past informs us about the ice sheet’s overall sensitivity to a warming climate and, hopefully, even how fast the ice sheet might melt in the future.”

GreenDrill was born out of a 2016 Nature paper led by Schaefer that provided the first evidence that Greenland once lost most of its ice, making it much more prone to melting than scientists thought.

Schaefer and Winckler began advancing a pilot study in 2017 when they received funding from Columbia’s Center for Climate and Life. The award enabled additional data analyses and the opportunity to further develop the project with their collaborators, activities they say were crucial to the success of the NSF proposal.

GreenDrill includes an extensive education and outreach component devoted to encouraging diversity and inclusion in the geosciences. Undergraduate students and early-career scientists will be recruited to participate in the research. In the New York City area, hands-on explorations tied to Next Generation Science Standards and multimedia initiatives will involve middle and high school students in the project.

“Sea level rise is such an intuitive narrative to get people interested in and connected to climate change, particularly in New York City, where the impacts of rising seas are part of living here,” said Winckler. “I look forward to taking our research to communities underrepresented in STEM but most vulnerable to impacts from the climate crisis and climate injustice.”

The researchers see the project as a vital and exciting first step toward uncovering how ice sheets behave and respond to a warmer world.

“GreenDrill represents a new frontier in geoscience,” said Schaefer. “I think it could be developed into a much broader flagship project that attracts scientists from other disciplines and expertise, and eventually covers all of Greenland.”

Lamont-Doherty Earth Observatory is Columbia University’s home for Earth science research. Its scientists develop fundamental knowledge about the origin, evolution and future of the natural world, from the planet’s deepest interior to the outer reaches of its atmosphere, on every continent and in every ocean, providing a rational basis for the difficult choices facing humanity. http://www.ldeo.columbia.edu | @LamontEarth