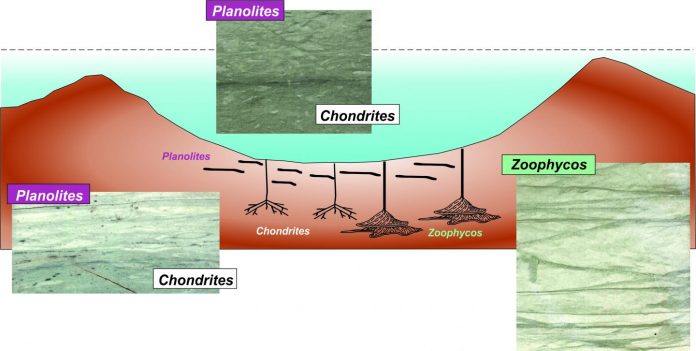 Boulder, Colo., USA: The impact event that formed the Chicxulub crater (Yucatán Peninsula, México) caused the extinction of 75% of species on Earth 66 million years ago, including non-avian dinosaurs. One place that did not experience much extinction was the deep, as organisms living in the abyss made it through the mass extinction event with just some changes to community structure.

New evidence from International Ocean Discovery Program (IODP) Expedition 364 of trace fossils of burrowing organisms that lived in the seafloor of the Chicxulub Crater beginning a few years after the impact shows just how quick the recovery of the seafloor ecosystem was, with the establishment of a well-developed tiered community within ?700,000 years after the event.

In April and May 2016, a team of international scientists drilled into the Chicxulub impact crater. This joint expedition, organized by the International Ocean Discovery Program (IODP) and International Continental Scientific Drilling Program (ICDP) recovered an extended syn- and post-impact set of rock cores, allowing study of the effects of the impact on life and its recovery after the mass extinction event. The end Cretaceous (K-Pg) event has been profusely studied and its effect on biota are relatively well-known. However, the effect of these changes on the macrobenthic community, the community of organisms living on and in the seafloor that do not leave body fossils, is poorly known.

The investigators concluded that the diversity and abundance of trace fossils responded primarily to variations in the flux of organic matter (i.e., food) sinking to the seafloor during the early Paleocene. Local and regional-scale effects of the K-Pg impact included earthquakes of magnitude 10-11, causing continental and marine landslides, tsunamis hundreds of meters in height that swept more than 300 km onshore, shock waves and air blasts, and the ignition of wildfires. Global phenomena included acid rain, injection of aerosols, dust, and soot into the atmosphere, brief intense cooling followed by slight warming, and destruction of the stratospheric ozone layer, followed by a longer-term greenhouse effect.

Mass extinction events have punctuated the past 500 million years of Earth’s history, and studying them helps geoscientists understand how organisms respond to stress in their environment and how ecosystems recover from the loss of biodiversity. Although the K-Pg mass extinction was caused by an asteroid impact, previous ones were caused by slower processes, like massive volcanism, which caused ocean acidification and deoxygenation and had environmental effects that lasted millions of years.

By comparing the K-Pg record to earlier events like the end Permian mass extinction (the so-called “Great Dying” when 90% of life on Earth went extinct), geoscientists can determine how different environmental changes affect life. There are similar overall patterns of recovery after both events with distinct phases of stabilization and diversification, but with very different time frames. The initial recovery after the K-Pg, even at ground zero of the impact, lasted just a few years; this same phase lasted tens of thousands of years after the end Permian mass extinction. The overall recovery of seafloor burrowing organisms after the K-Pg took ~700,000 years, but it took several million years after the end Permian.

GEOLOGY articles are online at http://geology.geoscienceworld.org/content/early/recent. Representatives of the media may obtain complimentary articles by contacting Kea Giles at the e-mail address above. Please discuss articles of interest with the authors before publishing stories on their work, and please make reference to GEOLOGY in articles published. Non-media requests for articles may be directed to GSA Sales and Service, [email protected]