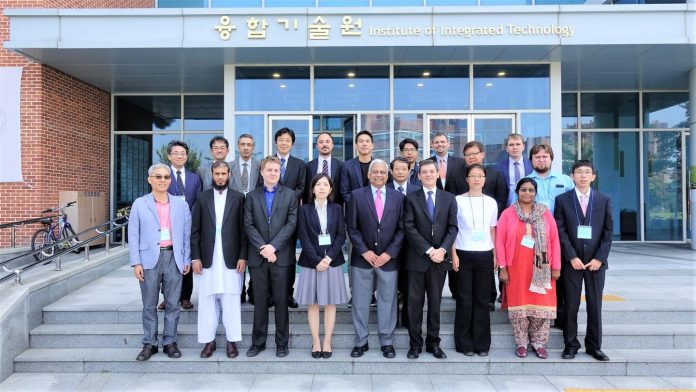 Safety concerns are always a part of the debate around nuclear power and its place in a growing global shift toward cleaner, low-carbon sources of energy.

“Devices like our cell phones and laptop computers are what immediately come to mind when we think of ‘wireless,'” Shankar says, “but in the context of nuclear power, wireless devices ensure that equipment is operating properly, without putting the plant’s personnel at risk.”

Shankar recently led a diverse group of international experts collaborating on a comprehensive report on the use of wireless technologies within nuclear power plants for the International Atomic Energy Agency, an autonomous organization within the United Nations.

The IAEA seeks to “accelerate and enlarge the contributions of atomic energy to peace, health and prosperity” by fostering “the exchange of scientific and technical information on peaceful uses of atomic energy.”

The December 2020 report, Application of Wireless Technologies in Nuclear Power Plant Instrumentation and Control Systems, is the culmination of a four-year IAEA research project (launched in 2014) on the economic benefits and emerging uses of the technology in the field of nuclear energy. The publication is part of the IAEA Nuclear Energy Series, which provides information on the proper use and application of nuclear technology and helps guide UN member countries that do not have mature regulations or guidelines established around nuclear power.

“In nuclear power plants, wireless devices act as sensors, monitoring process conditions like water flow, temperature, and pressure,” Shankar says. “They can also be used to look at the operational parameters of critical equipment and determine online if they are working properly.”

Those checks can be made remotely, he says, sidestepping the need to send someone in to investigate, and potentially risk exposure to ionizing radiation, especially in the case of an accident or natural disaster.

The ease of installation also makes wireless technology a game changer for the nuclear power industry, Shankar says. Implementing a network of sensors requires minimal disruption–no digging trenches, running massive amounts of cable, or other construction activity that could be potentially risky and expensive in a nuclear power plant.

With the effects of climate change accelerating global interest in low-carbon energy sources, Shankar sees nuclear power as a viable, clean energy option, equal to that of wind or solar. He stresses the importance of ensuring that countries interested in developing nuclear plants have updated, reliable information on how to proceed safely.

“Across industry, if we were to replace fossil fuels with cleaner energy, we’d have a good shot at addressing the climate change problem,” Shankar says. “Decarbonization of electricity generation is a major step in addressing climate change, and nuclear power has a substantial role to play in that process.”

Shankar, who has consulted for the IAEA for a number of years and is a nominated member of the agency, says his knowledge of nuclear power plants led him to take on the leadership role. The team, including chief scientists from 12 countries around the world, overcame cultural differences, language barriers, and logistical challenges to coordinate ideas and produce the report.

“Dr. Shankar’s work with the IAEA is a fantastic example of the relevance of the research being conducted by our faculty, on a global basis,” says Bill Hunter, director of Lehigh’s Office of Fellowship Advising and UN Programs. In 2004, Lehigh became the sixth university in the world to gain nongovernmental organization (NGO) status with the United Nations. Since then, Lehigh has grown its faculty and student involvement in the UN partnership through numerous research projects, internships, and externship opportunities.

Shankar says his work with the IAEA is a small step in the right direction.

“The consequences of not operating nuclear safely are really severe,” he says. “An accident with nuclear power affects the entire world and this technology will, hopefully, prevent such accidents from occurring.” So far, barring the natural disaster that befell the Fukushima power plant in Japan in 2011, nuclear power has performed reliably and safely for over five decades, Shankar says, while giving credit to the robust guidelines developed by UN member countries.