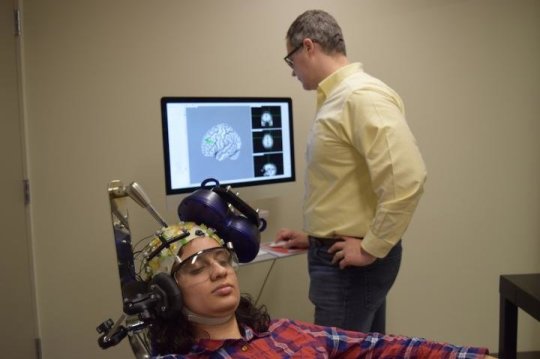 Using a few wires and sponges, in ordinary homes around the world, people are trying to hack their own minds. Thanks to a 2002 study that found a link between brain transcranial direct current stimulation and better motor task performance, “do-it-yourself” brain stimulation has become a growing movement among those who want to improve a whole host of cognitive and psychological functions, including language skills, mood and memory.

Scientists are split about the practice: Some say that while brain stimulators might not work as advertised (the ones available to purchase can cost hundreds of dollars), these devices are more-or-less safe. Others think the technique could cause damage, even if done in a controlled, clinical setting. Though “brain hackers” may be disappointed with their own results, their hope about the technology’s potential is rooted in an increasing amount of evidence.

The earliest clinical uses of brain stimulation date back to nearly 2000 years ago, when physician Scribonius Largus recommended the use of electric rays to treat headaches and neuralgia. By the 1980s, researchers began designing non-invasive stimulators and brain implants for treating specific diseases. Transcranial direct current stimulation (tDCS) — a non-invasive treatment that uses direct electrical currents to stimulate specific parts of the brain — has been shown, in a few small studies, to purportedly improve language skills, boost memory and strengthen reflexes. Transcranial magnetic stimulation (TMS), another non-invasive procedure, is sometimes used to treat depression. And clinical trials are underway to see if stimulating the brain can treat other medical conditions, such as Parkinson’s.

But is the treatment ethical? Will physicians one day prescribe electromagnetic stimulation as readily as antidepressants? Would patients oblige if they had to administer it to themselves? What about to others?

Despite growing interest in brain stimulation, researchers know little about the public’s intuitive attitudes toward the use of the technique. That led John Medaglia, PhD, a professor of psychology at Drexel University’s College of Arts and Sciences, and his colleagues to survey over 800 individuals about their willingness to endorse specific uses of brain stimulation on themselves and others. Their results were published this month in the journal Brain Stimulation.

“In our own experience, we thought it was interesting that many researchers, clinicians, and the public all seemed to have strong ideas about what is right and wrong to do with brain stimulation. However, we know very little about why and how moral reasoning guides attitudes and real-world use,” Medaglia said.

He argues that studying the public’s attitudes toward brain stimulation could have important implications, including being able to predict potentially dangerous trends in home use, and also being able to better communicate about the treatment’s benefits.

“People today still struggle mightily with the basic concept of vaccination for sociocultural reasons. What if we discovered a safe, medically necessary form of brain stimulation for brain injury? How would physicians know how to communicate with a family that believed it was evil to use it, even if no other treatment could work? We’re entering an age when questions like these will be increasingly common,” he said.

On the first survey, subjects responded about how they felt about using Ceremode on themselves. On the second survey, they rated how they felt about using the technology on other people. Specifically, the surveys asked them to consider using brain stimulation on 16 cognitive functions more “core” to their authentic self-identity (like empathy, kindness and self-confidence) or “peripheral” to their identity (like memory, concentration and reflexes). The study volunteers were then asked to report whether they would be more willing to use stimulation to enhance each of the functions on a healthy person or to repair it following brain injuries.

“The key was that for each use, we asked them not only how willing they were to use stimulation, but also how ‘morally acceptable’ it was,” Medaglia said. “That allowed us to see whether personal identities, using technology on the self or others, and moral acceptability relate to willingness to use brain stimulation.”

Medaglia and his colleagues expected that moral acceptability would be strongly related to willingness to use brain stimulation, but there was some deviation from that trend. For example, many respondents indicated that they would sometimes prefer to use stimulation to enhance themselves on functions that could give them performance advantages (like better memory or concentration), even though they reported that it was “more moral” to repair, rather than enhance, the core identities (like kindness and mood) in others.

“What’s surprising is that even though we’re just asking hypothetical questions, sometimes people will report that they’re willing to use brain stimulation in less moral ways when it suits themselves,” Medaglia said. “However, it’s encouraging to know that people are generally looking out for those who might be struggling the most.”

Medaglia said the study is a first step in understanding the public’s moral reasoning behind the use of brain stimulation. They say that next steps might include studying similar ideas in those who have to make challenging decisions about brain stimulation in clinics and research.

“The most important next steps are to clarify how the specifics matter. For example, do people consider it more moral to use drugs or brain stimulation to change certain mental functions, and why? If we make people think morally before they consider using brain stimulation, would it change their behavior or understanding of the ethical issues?” Medaglia said. “We hope that other researchers will be interested in studying these questions with rigorous methods.”