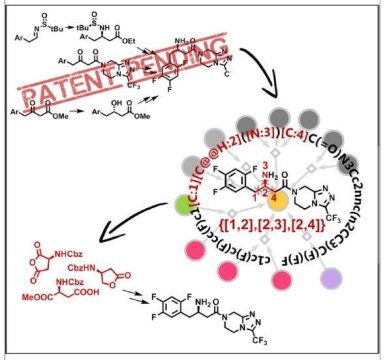 Routes to making life-saving medications and other pharmaceutical compounds are among the most carefully protected trade secrets in global industry. Building on recent work programming computers to identify synthetic pathways leading to pharmaceutically complex molecules, researchers in Poland and South Korea have unveiled computerized methods to suggest only synthetic strategies that bypass patent-protected aspects of essential drugs. Their work appears January 17 in the journal Chem.

“When we started this project, I was somewhat skeptical that the machine would find any viable synthetic alternatives — after all, these are blockbuster drugs worth gazillions of dollars, and I was sure that the respective companies had covered the patent space so densely that no loopholes remained,” says senior author Bartosz Grzybowski, a professor of chemistry at the Ulsan National Institute of Science and Technology (South Korea) and the Polish Academy of Sciences and the lead developer of the organic synthesis software Chematica. “It turns out that the loopholes are there, and we can find new retrosynthetic pathways that circumvent the patents entirely.”

Those pharmaceutical patents protect the company’s intellectual property while also preventing competitor companies from using certain key synthetic solutions — developed painstakingly by experiment to maximize yield, increase purity, and reduce costs — when attempting to produce desired compounds. To get to viable unpatented options, the researchers “froze” challenging portions of each target molecule, forcing the computer to substitute unconventional yet chemically plausible approaches on the basis of mechanistic rules. They tested their system out on three notable commercial medicines with different chemical hurdles: linezolid, a last-resort antibiotic; sitagliptin, an antidiabetic drug; and panobinostat, a multiple myeloma treatment.

In each case, when allowed to run without constraints, the program recommended the commercial syntheses. But when even a few atoms and bonds were designated as untouchable, it innovated by applying Chematica’s existing functions to propose new plans that neatly avoided those already patented. “By algorithmically locating the key bonds on which patents hinge and propagating them down Chematica’s retrosynthetic trees, we can generate synthetic solutions from alternative yet economical starting materials, achieving a real practical impact,” Grzybowski says.

Chematica’s patent-dodging abilities could also alter how chemists approach intellectual property and patent law. For example, machine-aided searches could be used to restrict many different parts of a target molecule, lumping radically different syntheses into a single airtight patent. According to Grzybowski, however, such a patent would not necessarily stay loophole-free forever, thanks to the likely future experimental discovery of novel reactions driving chemical knowledge forward through healthy competition.

Overall, the researchers hope that their software will aid pharmaceutical companies in better protecting their intellectual property and, simultaneously, will help accelerate research and development in organic chemistry by supplying synthetic routes that differ from standard approaches. “This work illustrates the benefits of pushing chemists to think algorithmically and asking computer scientists to grasp key chemical concepts, delivering chemical artificial intelligence results that matter beyond the confines of academia,” adds co-author Piotr Dittwald, a research fellow with training in mathematics and computer science.