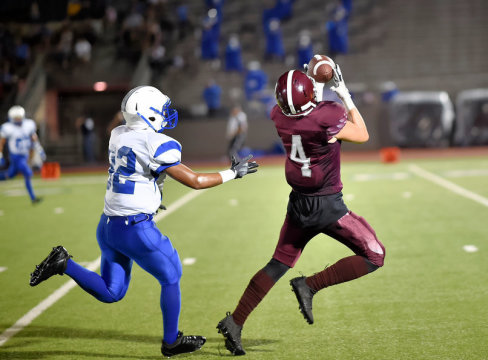 While elite athletes are often at peak fitness, they are not immune to — and may even face a higher risk for — potentially detrimental heart conditions later in life. Former National Football League (NFL) players, particularly those with larger body sizes, were found to have heart abnormalities specifically associated with high blood pressure in a study being presented at the American College of Cardiology’s 68th Annual Scientific Session.

The study is the first to examine how an athlete’s body type and training style (strength versus endurance-based training) may influence changes in the shape of the heart years later. It’s also the first to tease apart changes that result from the intense nature of athletic training, which are likely harmless, from changes resulting from uncontrolled high blood pressure, which could be a warning sign for cardiovascular problems.

“Because of their years of athletic training at the most elite level, there tends to be an expectation that former professional players would have fewer cardiovascular issues, but there’s a growing body of research that suggests that’s not the case,” said Genevieve Smith, PhD, a faculty instructor at Tulane University School of Medicine and the study’s lead author. “Our study suggests we need to be vigilant in monitoring players’ cardiovascular health, because we don’t yet truly understand the long-term consequences of high-performance athletics.”

Elite athletes commonly show changes in the shape and size of their hearts in response to the advanced level of athletic training they receive; these changes are collectively known as “athlete’s heart.” One component of athlete’s heart is left ventricular hypertrophy (LVH), an increase in the thickness of the wall of the heart’s left ventricle. LVH is not thought to be harmful when it develops as a result of athletic training. However, in the general population LVH can develop as a consequence of uncontrolled high blood pressure, or hypertension, and is linked with an increased risk of heart disease.

The new research is part of an ongoing study of the health of professional football players supported by the NFL Player Care Foundation. Researchers examined echocardiograms and images of the heart, along with blood pressure measurements and demographic factors, in a sample of 1,172 former players.

Overall, about 12 percent of players in the sample had LVH, a rate comparable to that found in the general public. The condition appeared to be linked with an increased rate of hypertension, a key risk factor for cardiovascular disease. Former players with severe LVH had significantly higher blood pressure, by about 13 mm HG on average, than those without LVH. Former players with hypertension were also 1.5 times more likely to have LVH than those without hypertension.

“In spite of the fact that these guys were, at one point, incredibly active and in incredibly good cardiovascular shape, down the line they may still end up having some significant cardiovascular abnormalities,” Smith said. “What we don’t know is whether the changes we’re seeing later in life are related to the high blood pressure or to the ‘athlete’s heart’ that they had when they were professional players.”

Smith and her colleagues believe the type of LVH offers some clues. In concentric LVH, the left ventricle wall is thicker and larger, but the chamber (where blood collects during the filling cycle of the heartbeat) is normal. In eccentric LVH, both the left ventricle wall and the chamber are enlarged. It is likely that younger players have eccentric LVH as a result of their training, while older players have concentric LVH as a result of uncontrolled hypertension, Smith said.

In addition, the researchers found the likelihood of LVH tracked closely with the player’s position. LVH was most prevalent in positions that emphasize strength-based training and large body size, including linemen, fullbacks, running backs, linebackers, quarterbacks and tight ends. The condition was least prevalent among players in skill and speed-based positions such as cornerbacks, safeties, wide receivers, returners, kickers and punters. Those in positions emphasizing strength-based training were equally likely to have eccentric or concentric LVH, while those in skill-based positions were more likely to have concentric LVH.

The findings underscore the need for former players and their doctors to keep an eye on any cardiovascular risk factors and work to keep blood pressure in a healthy range, Smith said.

Another early warning sign for heart problems is obstructive sleep apnea, a common sleep disorder. In a separate study, Smith and her colleagues found that a simple eight-question questionnaire administered during a check-up is a useful low-cost method to flag potential sleep apnea among former NFL players. Sleep apnea has increasingly been linked to cardiovascular disease.

In this study, former players who reported symptoms of sleep apnea on the questionnaire were more likely to have hypertension and LVH than those reporting few or no sleep apnea symptoms. While an overnight sleep test is required to definitively diagnose sleep apnea, the questionnaire can be used as a screening tool to identify patients who may need to be tested, Smith said.

Both studies were funded by the NFL Player Care Foundation.

Smith will present the study, “The Effect of Career Playing Position and Detraining Time on the Prevalence and Persistence of Left Ventricular Hypertrophy in a Population of Former Professional Football Players,” on Saturday, March 16.

Simpson will present the study, “The Association of Obstructive Sleep Apnea with Left Ventricular Hypertrophy and Aortic Root Dilation in a Population of Former Professional Football Players,” on Monday, March 18.