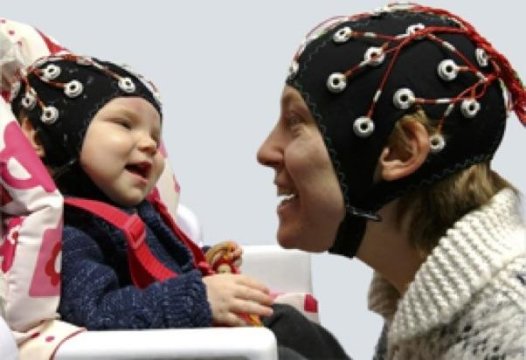 When infants are playing with objects, their early attempts to pay attention to things are accompanied by bursts of high-frequency activity in their brain. But what happens when parents play together with them? New research, publishing December 13 in the open-access journal PLOS Biology, by Dr Sam Wass of the University of East London in collaboration with Dr Victoria Leong (Cambridge University and Nanyang Technological University, Singapore) and colleagues, shows for the first time that when adults are engaged in joint play together with their infant, their own brains show similar bursts of high-frequency activity. Intriguingly, these bursts of activity are linked to their baby’s attention patterns and not their own.

The authors simultaneously recorded electroencephalography (EEG) data from 12-month-old infants and their mothers when they were playing separately or together with toys. “Most infants spend the majority of their waking hours in the company of others. But almost everything we know about early learning in the brain comes from studies looking at individual baby brains in isolation,” said Dr Wass, lead author on the study. “By recording activity in a baby’s brain and their mother’s brain at the same time, we were able to see how changes in their brain activity reflected their own or each other’s behavior while they were playing together.”

“We know that, when an adult plays jointly together with a child, this helps the child to sustain attention to things,” he continued. “But until now we haven’t really understood why this is. Our findings suggested that, when a baby pays attention to things, the adult’s brain tracks and responds to her infant’s looking behavior — as if her infants’ actions are echoed in the parent’s brain activity. And we also found that, where the parent’s brain is more responsive to the child, the child sustains their attention for longer.”

Dr Leong, senior author on the study, said, “Our project asks more questions than it answers. We don’t know, for example, whether some parents are more responsive to their babies than others — and if so, why. And our study just looked at mums, so we don’t know whether mums and dads may be different in how they respond neurally to their babies. Our findings are exciting, but there is a lot more to investigate about how, exactly, this type of neural responsiveness by parents may help young children to learn.”