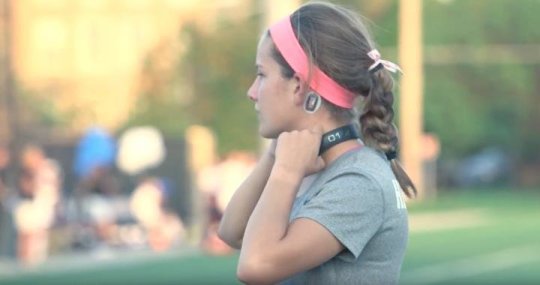 A new study of female high school soccer players suggests that a neck collar may help protect the brain from head impacts over the course of a competitive soccer season.

“In sports, there’s a heavy focus on single big blows to the head that might lead to what is subjectively described as a ‘concussion,'” said Greg Myer, PhD, director of sports medicine research at Cincinnati Children’s and lead author of the study. “What we really wanted to look at now is the cumulative effect of head impact exposure over an entire season. Evidence indicates that cumulative load of head impacts is potentially more concerning than that one single blow.”

The neck collar device, called a Q-Collar, is designed to press gently on the jugular vein to slow blood outflow, increasing the brain’s blood volume during competitive play. The resulting effect is blood filling the brain vessel (like an airbag) to help the brain fit tighter within the skull cavity, reducing the energy absorbed by the brain during collisions.

The study, published online in the British Journal of Sports Medicine, focused on cumulative sub-concussive impacts to the head that change the white matter structure of the brain. In soccer, that can come from a head ball to a collision with another player to a hard fall.

“White matter is essentially structural pathways that connect all the information/signal processing centers of the brain that support normal function,” said Dr. Myer.

Dr. Myer and his colleagues studied 46 female high school soccer players. Twenty-four of them wore a Q-Collar. All 46 athletes underwent neuroimaging at up to three points in time over a six month period. This included the 3-month soccer season and 3-month post season rest period, with no exposure to head impacts. Head impacts were tracked using accelerometers — a computer chip — placed behind the left ear during practice and games.

Imaging conducted three months after the end of the soccer season showed that white matter changes in the non-collar group had either partially resolved or tracked back to normal.

“Certainly, we know the benefits of playing soccer in female athletes far outweigh the risks that we are seeing and that’s an important message we have to take away from this study,” said Dr. Myer.

“This could be a paradigm shift in how we study the brain and protect the brain internally from head impact exposure,” said Dr. Myer. “We need to continue to do larger studies with various populations and as we move forward with more research we will know more on how effective this approach can be to protect the brain.”